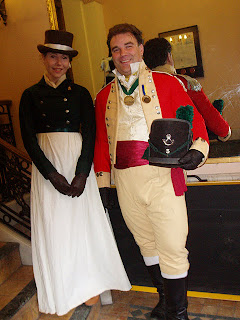 Saturday 8th October saw enthusiasts of all sorts – readers, writers, re-enactors, and dancers - gathering to celebrate all things regency.  So many people had such fabulous costumes, that I hadn’t been in the Royal Over Seas Club for long before I felt like a provincial schoolmaster’s wife, rather overawed by the glamour and excitement of life in the metropolis.
As it is the bicentenary of the publication of Sense and Sensibility, the programme naturally included some serious discussion of Jane Austen’s works.  But there was also a display of reproduction costume, parlour games, and walks around St. James with a most authentic military escort, while a guide pointed out the gentlemen’s clubs and the site of Almack’s.  The soldiers attracted a lot of interest.  (And lapped it up!)  I can quite see why Lydia Bennet lost her head to a man in a scarlet jacket.  There is something very appealing about a man in uniform.
I refrained from following the drum, instead staying decorously indoors to listen to a fascinating talk given by Georgette Heyer’s biographer, Dr Jennifer Kloester.
Then followed what was the absolute highlight of my day.  I learned to dance a cotillion.  Well, perhaps to claim I learned it is a bit of an exaggeration.  There was a dancing master who showed us the steps, and encouraged us to have a go, to the music he provided, but there was a good deal of giggling and bumping into each other going on.  It was all the more confusing as people forgot, halfway through a set, whether they were supposed to be a lady or a gentleman.  Still, I feel as though I have a much better idea of what it would have been like to attend a regency ball.  Nowhere near as elegant as I’d pictured, but a lot more fun.  At the end of our session, I also understood why the older ladies sat on the sidelines watching.  I felt as though I’d had a workout.  That kind of dancing requires a good deal of stamina.
I also learned that travelling around in full length dress, with luggage, is quite a struggle.  When I grumbled that I did not have enough pairs of hands, as I was struggling up the stairs with my skirts rather indecorously hitched up to prevent myself from tripping, and more bags than I could manage, the utterly charming Roy McMillan, of recordings, promptly volunteered to act as my footman.  We then had a discussion about the appeal of the regency rake.  It is, I told him, the enduring fantasy of being the one woman in the world capable of redeeming a bad boy.
In the afternoon, several of us walked to the East India Club, where we were treated to a re-enactment of the moment Major Percy (played by Miles Barden) arrived in a post-chaise - several captured eagles sticking out of the windows - with dispatches from about the outcome of the Battle of Waterloo.  He’d come straight from the battlefield in his torn and bloodstained tunic, and had barely slept for six nights.  Gripping stuff – though I could perhaps have done without the graphic description of the matter which fell off his tunic when he finally got into bed, which he thought must have been particles of somebody’s brains.
I shall gloss over the talk about sex in Georgian England, and contemporary novels set in that era, since I was participating - except to say that because one of the soldiers was sharing round snuff immediately before the session, whatever we said was greeted by a chorus of hearty sneezing.
To round the day off, there was a lively discussion about whether Austen and Heyer were better than they thought they were.  Neither of them received recognition from the literati during their lifetime, though their work itself has endured and grown in popularity.  Austen was diffident about her work, speaking of it as being akin to that of a miniaturist.  And although Heyer knew she was good, she would have thought it vulgar to say so.
What blew me away, was to learn that Heyer never had an editor.  Not only that, but she sometimes just sat at her typewriter, and produced a completed novel in two months.  Nobody suggested revisions.  You can imagine the collective groan from the assembled authors on receipt of that tidbit! 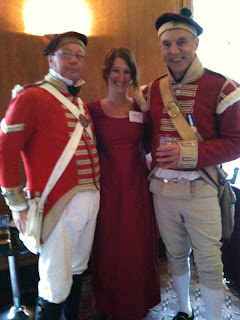 We all agreed that it was about time somebody produced the works of Heyer for the TV or film.  There is so much action and comedy, as well as the central romance, that they would make for really entertaining viewing, and bring her works to a completely new audience. 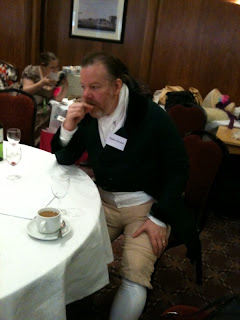 By this end of the day we’d got over our initial shyness, and were soon not only putting forward the case for why our favourite works would make the best visual drama, but also naming which actors we’d like to play the various heroes.
The panel who were leading the discussion all favoured The Grand Sophy, although Dr Jennifer Koestler also put the case for Cotillion.
Personally, I’d love to see The Foundling made into a film.  There is all the drama of the Duke of Sale burning down the inn where his kidnappers try to hold him to ransom, the ongoing battle of Belinda to get her purple dress, and the side issue of Gideon Ware, striding about in his regimentals, absolutely refusing to tell anyone what his cousin is up to.
I propose Greg Wise for the part of Gideon Ware.  Or maybe James Purefoy. 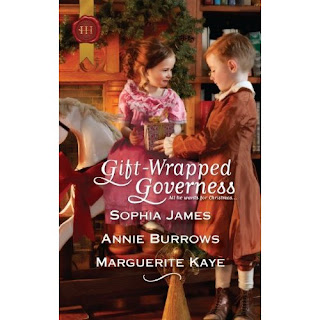 Annie's next book, GIFT-WRAPPED GOVERNESS is available in November 2011
"Lord Chepstow hasn't seen Honeysuckle Miller since she was a plain, awkward schoolgirl.  Now she's not so plain and is looking after the host's children at a lavish Christmas house party.  And the last thing Lord Chepstow expected to want on his Christmas list is the prim governess!"
Posted by Unknown at 6:05 PM

It sounds like a wonderful time was had by all!

It was a lovely day - I must sort out my photos too.

I'm gnashing my teeth that I had a commitment elsewhere and couldn't joined in the fun.

Me too, Jean, looks a fine event: though I would have been irritated to be so out-dashed by the military folk!

There's some teeth-gnashing going on here too! Wish I could have gone, it sounds fabulous!

It was a fabulous day, but a pity there weren't more of us there. I loved it - even though I don't write Regency!

I'm with Lelsey- an amazing day and so pleased I went even though I don't write Regency...I have always read it. Although my DH and DD haven't even and still had a wonderful day.

Thanks for such a good description of the day. I almost felt I was there... Yes, why haven't they televised Georgette Heyer when they're on their third or fourth dramatisation of some of Austen or Dicken's works?

Loved Annie's summary of the day! I thought it was a wonderful event and thoroughly enjoyed myself. Thank you to all the organisers - what a triumph!

I paid my money and then was unwell. I'm so disappointed it won't be happening again. It looks and sounds as if it was wonderful.

This made me want to have been there, but I got a lovely flavour of what the day must have been like. Three cheers for all the organisers, and Annie for writing it up so brilliantly.

Oh, how fabulous it must have been! Thanks for this post, Annie.

It was a real treat for me to be there - glad you got the flavour of the event from my post. The minute I got home I dug out my copy of The Foundling and have re-read it. Dr Koestler's talk about Georgette Heyer has made me want to re-read all her works all over again!

Thanks for the summary, Annie. It really captured the flavour of the day. I thoroughly enjoyed the day -- learned a lot from Jennifer Koestler, enjoyed the Sense and Sensibility panel and had great fun with the dancing (I watched from the sidelines :)) I agree with Sarah. Three cheers for all the organizers!

Will it really not be happening again. No, don't tell me!

Must have been a wonderful time. I love the thought of Georgette Heyer's books as films - although have to say with some tripadtion as favourite books too often have been disappointed movies. Did anyone suggest These Old Shades? Has always been at the top of my list of her books but would need a really top actresses to try and get that "Bah" right!

And as proved in my comment I sure need editing!