On The Eighth Day of Christmas...Kate Walker

On the eighth day of Christmas Kate Walker adds an angel to the RNA Christmas tree... 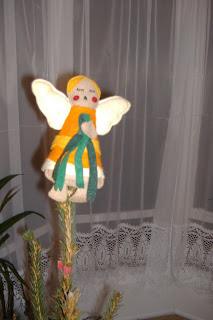 A long time ago, before I was published,  and so I  had time to do things like crafts and such, I found a pattern to make some lovely felt decorations for the Christmas tree. In a rush of enthusiasm and wanting to make Christmas very special for my son who was just two at the time,  I decided to have a go at making them. Here is my little felt angel that I made all those years ago.
There were a couple of other little decorations I made as well that year - Father Christmas with a wonderful beard, and the Snowman with his jaunty hat and scarf, a very red nose.
I have very special memories of the evenings I spent cutting out felt, stitching it, stuffing the little  bodies, and gluing on decorations. I had to do it in secret so that my son had no idea about the decorations until he first saw them on Christmas morning on the tree.  My Mother in Law was staying with us at  the time and she decided to help me so we did the job together.   We had a glass (or two) of sherry while we were working so we were lucky that the decorations turned out so well – we got fits of giggles several times and when  bits like the  angel’s red cheeks or the snowman’s conical  ‘carrot’ nose just wouldn’t stick in the  right place.
Sadly my Mother in Law died last year and so Christmas 2011 was the first time that we put the decorations on the tree without her seeing them. The little angel is a bit battered and worn – she’s see a lot of Christmases – but when they are hanging on the tree together that always makes me feel it's really Christmas. 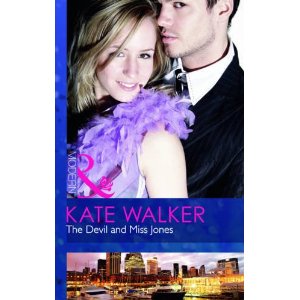 Martha Jones has never taken a risk in her whole life. Until the day she runs out on her wedding and succumbs to the magnetism of a man she has only just met! A man she knows only as Diablo.

Lone wolf Carlos Ortega won't promise Miss Jones more than one searing-hot night. Yet Carlos is shocked by Martha's sweet innocence. This runaway bride is a virgin, and it seems the repercussions of their sizzling encounter could last forever . . .

I think your Angel is beautiful!!

Thank you Mary. I'm very fond of her - she's getting a little elderly but she's been in the family so long it wouldn't be Cjristmas without her.

Handmade decorations are a lovely personal touch. I love them

Hi Maria, like you, I love anything that is handmade - it has such a special link to the person who made it. And in this case I always feel connected to my Mother in Law when I put the angel on my tree.

That's a lovely story. How nice that you have such happy memories of laughing with your mother- in-law.

Thank you Chris - it is special to remember the fun we had together making these decorations - it's only bettered by the time we decided to ice the Christmas Cake in an untraditional way! But that's another story.