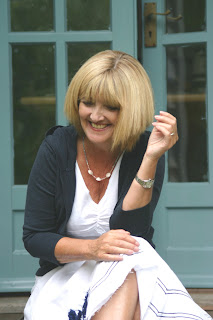 Judy Astley had been writing since she was a child but, intimidated by the sheer class of the writers studied during an English degree, gave it up until she was in her thirties when her children were in school and she had to face the awful prospect of getting a Proper Job. Before that, she’d got by as a dressmaker and designer, a painter and had written and illustrated a children’s counting book. Her first book, Just for The Summer, was published in 1992 and she’s just finished her seventeenth novel for Transworld.

Tell us about your latest book, and what inspired you to write it.

The new book is called I Should Be So Lucky and it’s about Viola who has had zero luck in her love life. Her first husband (the lovely Marco, father of their daughter Rachel) is gay and now lives with his partner James. Her second, Rhys, was a soap-star love rat who died, crashing his Porsche while leaving Viola for another woman. The book is about Viola getting her life back, both from the past and from her over-protective family who fear she is a doomed sort and needs looking-after.

It was a teeny thing that inspired the book. I got interested in the idea of guerrilla gardening – planting up spare neglected bits of land, either with flowers to jolly up a scrappy place or with vegetables for anyone to have. So I thought a guerrilla gardener would be a fun hero-type character and Viola meets him in the first chapter where he’s planting a tree on a traffic island in the middle of the night and she thinks he’s up to some serious No Good. 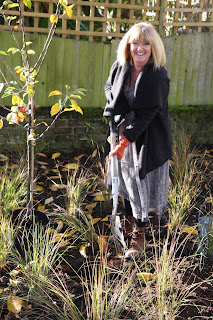 I thought I should do my bit too – and close to my house where the council only rarely turn up to tend a scruffy old plot, I’ve sneaked in an apple tree – my first step to forming the Twickenham Embankment Community Orchard. I’ve got a plum tree ready to go in when it’s warmer..

Do you have a critique partner or share your work with anyone before you submit to an editor?

Nobody gets to see it before my editor and that’s when it’s completely finished, rather than me sending it in in chunks of chapters, though sometimes I’d quite like to do that, if only to stop me twiddling with it. If I get stuck, I might go out for lunch with my husband and maybe run a few ideas past him. He’s a lateral thinker and often comes up with something I’d never have thought of, plus he’s not had his brain cluttered up by reading it so only sees the problem-of-the-moment.

Your books are full of wit and humour. Does it come naturally or is it a skill you’ve acquired with practice?

I think the older I get the funnier I think life is but I’ve always seemed to see the funny side of most situations. I was once at a funeral and aching with suppressed laughter because the coffin was resting on its stand at a a worrying angle and I was imagining the terrible possibility of it tumbling to the church floor. The awful thing is, I half-hoped it would (the occupant would have loved that, as it happens!) I never said I was nice..

What do you enjoy most about being a writer, and the least? 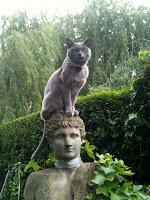 The best thing about writing is the chance to be in the company of other writers who are my absolutely favourite sort of people. There can be no better work-fun than to get together with a bunch of authors and just yak for hours. I also love it that lying on a sofa with tea/wine and the cat draped across me while I’m reading through the day’s output is actually ‘work’. The worst thing – deadlines. I’m not good with deadlines. I end up all of a rush, like doing your homework on the bus. I must grow up.

Of all the characters you’ve created, which one holds a special place in your heart?

I’m a bit torn here. There’s lovely feisty Polly, a ten year old from Pleasant Vices with a show-biz ambition to join the Putney Shangri-la Majorettes and who opens the book by asking her mother, “Mum, what’s oral sex?” (not sure it would be OK to open a book with a child asking that these days..) And I also love Melanie from Unchained Melanie who is writing gruesome detection fiction and getting used to life on her own now her ex has remarried and their daughter has gone to university. It’s a book with sad bits in and fairly deep stuff as well and I gave her a gorgeous gardening (again!) man to fall for.

If you could have the best seats to any event for free, which would you choose? 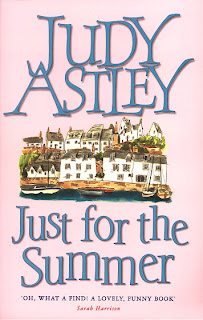 I’d choose the one that I missed – the Rolling Stones at the O2. I dithered about whether to buy tickets or not because I was so furious at the massive price and I wasn’t going to part with £200 just to be at the back of the arena in touching distance of the roof. And then when I changed my mind it was too late. Now of course I regret it so for this question, please let me re-wind time.

What makes you laugh the most?

Recently, some seemingly straight but utterly outrageous lines on Coronation Street. Dignified and solemn Mary and Roy in the café, playing chess. She’s eating a sandwich and says, “Sorry Roy, I’ve spilled piccalilli on your bishop”. Had me in fits. And last week, an old hopeful, dating Audrey and asking her if she plays bowls. She says no so he says, “You haven’t lived till you’ve had a wood in your hands”. I can just see the gloriously camp scriptwriter coming up with those. Priceless, for me.

In a slightly loopy way (because I’d made her up in the first place), I’ve always wondered what happened to Miranda, who was a pregnant 16 yr old in my first book, Just for The Summer, set in a Cornish seaside village. It’s been 20 years since that was out so I’ve just written a follow-up with Miranda as the main character this time. Her step-father Jack has just died and the family return to where they once had a cottage to scatter his ashes and have a sort-of memorial holiday. Miranda is more than a bit surprised at who is still around... I loved writing this as I already knew the people but had to move them on. It’s called In The Summertime, doesn’t require previous reading of the first book as it works fine as a stand-alone and should be out in hardback some time around July. 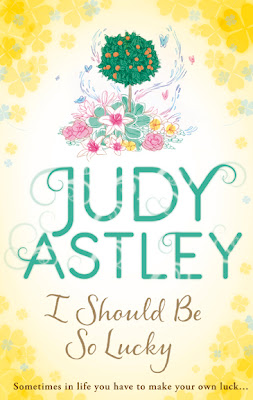 Thank you for sparing time to talk to us today, Judy. We wish you continuing success with your books. To find out more visit her website:

Posted by Freda Lightfoot at 8:55 AM

lovely interview, Judy. I liked your guerrila gardening too in 'I should be so lucky' and I love that you've actually done it too!

I loved this interview, Judy. A brilliant idea to make one of your characters a guerrilla gardener. And I agree about Coronation Street scriptwriters. Some of the lines are classics of their time!

Guerrilla gardening, what a wonderful idea! I love novels about women moving on, letting go and growing wiser (but not older!) as they go, so I look forward to reading 'I should be so lucky'. Which, incidentally, is a wonderful title!

Fabulous interview. Don't be shy about blowing your own trumpet, 'cos nobody's going to blow it for you, if you pardon the expression! Can't wait to read the book.

Great interview, Judy. I like the idea of you catching up with Miranda. And totally agree about the Corrie scriptwriters. They come up with some brilliant lines.

Great Interview Judy - love the pic. Loved 'I Should be so Lucky - fab hero.

Loved Just for the Summer - my first Judy book, so really looking forward to the 'sequel'. Lovely interview. x

I thoroughly enjoyed your interview, Judy, and could just imagine you at the funeral, trying not to laugh.

'In the Summertime' sounds a great idea for a story. Shall watch out for it.

Yes, that Corrie line had me laughing for a long time, too.

For Corrie situations, nothing will ever beat Derek and the water bed!

Great stuff, Judy. I can't believe it's 20 years, and I shall give myself the treat of re-reading Just For The Summer before In The Summertime. And I LOVED I Should Be So Lucky. (Well, I would, wouldn't I?)

What a lovely interview. I'm afraid I suffer from wanting-to-laugh-at-a-funeral syndrome too!

Thanks for such lovely comments! I've been out today in the snow, checking that my secret apple tree is OK and wondering if I should drape it in protective fleece. But although it's snowy, it's not that cold so I'll let nature take care of it.
Love to you all and thank you xxxx

Damn,Just finished reading I Should Be So Lucky, Judy and I've gone and fallen in love with Greg.I've always had a weakness for men with Landrovers.

I love the idea of guerilla gardening and reading this interview has reminded me that I haven't bought my copy of I Should Be So Lucky yet, so I'd better get on and do so now.

I think we come from the same SOH school, Judy. A friend was driving along with her daughter (seven) and young son, when daughter piped up, Mum, what's that horse doing on the other horse's back? Um...? Definitely a cringe-making moment. Mum hurriedly pointed out a huge blackbird flying by. I would love to use that in an opening line! Best of luck! :) xx

Yes I quite like a Land Rover too - there's something of-the-earth about them, though for me it's not quite up there with a hot guitar. A louche-looking man wielding a Strat is my big weakness and yet I've never actually written about one. Maybe soon...