On The Tenth Day of Christmas...Charlie Cochrane

On the tenth day of Christmas Charlie Cochrane decorates the RNA Christmas tree... 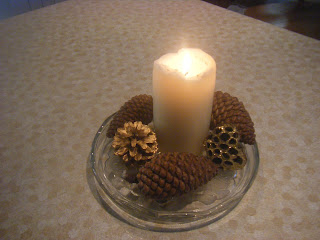 This old glass stand plays a part, in some shape or form, in our Christmas decorations every year. It belonged to my mother – I have no idea where or when she got it, but it always appeared on special occasions, laden with jam tarts or whatever snack was the favourite of the time. (Whenever I think of Christmas I think of Ritz biscuits with Dairylea and celery on them and I bet this glass stand saw a few of them in its time.)
This year’s incarnation has seen it used as a candle holder all through Advent and now it’s gracing the Christmas table. There’s a story behind those fabulous pine cones, as well. A big branch came down off a tree just across the road from our house, laden with huge cones. At the risk of life and limb I diced with the rat run traffic to rescue it, with the intention of drying it out and using it on the fire pit. I’m pleased I resisted the urge to do that and found a more constructive use than just fuel.
On twelfth night that glass stand will go away for another year, taking memories of happy Christmasses – then and now – safely with it. 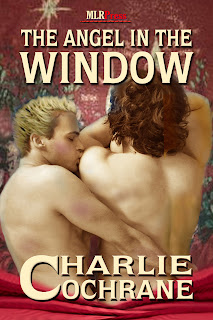 Two officers, one ship, one common enemy.
Alexander Porterfield may be one of the rising stars of Nelson's navy, but his relationship with his first lieutenant, Tom Anderson, makes him vulnerable. To blackmail, to the exposure of their relationship—and to losing Tom, either in battle or to another ship. When sudden danger strikes—from the English rather than the French—where should a man turn?

Lovely post, Charlie! I love pine cones! I have two very large ones kept on display we bought back from Corfu. Am I allowed to admit that? Should I have declared? Ah well!

I won't snitch if you don't. (I have an old policeman's truncheon in the wardrobe - that has to be worse than pine cones?)