On the Ninth Day of Christmas...Jenny Haddon

On the ninth day of Christmas Jenny Haddon decorates the RNA Christmas Tree... 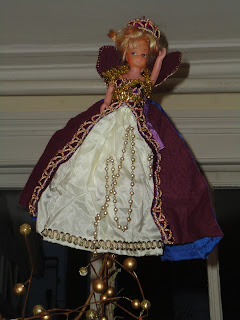 My favourite is a Very Old Friend. She is four years younger than I am. I remember her arrival.

My parents were a) a whole generation older than most people's parents and b) hard up. The first time either of them made Christmas it was for me and they did it on a shoestring. My father hacked a branch off a major conifer in our garden and my mother anchored it upright, somehow.  They made decorations, bought lights. But there was no money for a Fairy, they explained. I went to bed on Christmas Eve and there was a workmanlike star on the top of the tree.

But when I came down in the morning there was -  a Fairy.

I can still taste that feeling of not daring to believe because you are so much luckier than you deserve or thought possible. (Didn't feel that again until my first book was published, now I come to think of it.) I adored her.

My mother had acquired a sub Barbie from a bring-and-buy sale and dressed her out of floaty white scraps, with starched muslin wings and a wand made of glittering milk bottle tops wrapped round a matchstick.

Mind you, that fairy was always a free spirit. When he thought I was listening my father said, 'That fairy has been on the toot.'  It was her expression. It still is.

Over the years she has been Roman (toga made out of a silk handkerchief) a hippy (tinfoil and doilies) and, these days, at the behest of a Shakespearian actor friend, the Duchess of Malfi (remnant box). But she still leans unto the wind with That Look in her eye. Way Hey!

Jenny's latest book... To Marry a Prince by Sophie Page, published by Arrow 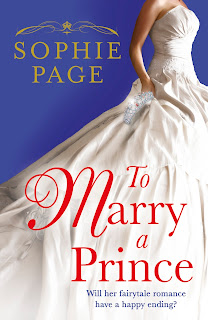 What a wonderful story, Jenny! She's clearly a star in her own write.

How lovely, Jenny. On the toot is SO right for her.

What a magical Christmas that must have been for you as a four year old, and after all, that is what it is all about!

Her expression is priceless - and she is obviously a fashion star. That is a delightful story and exactly what makes Christmas so special.

Love this story, Jenny. We used to have a fairy for a time too, now a star, although a golliwog has been placed on their in the last few days by my husband. Puts a new twist on Christmas!!