Beautiful and talented actress, poet and fashion icon, Mary Robinson was one of the most famous women of her time - yet she died virtually penniless, her reputation in ruins. Mary was destined always to be betrayed by the men she loved - her father, her husband and, most seriously, by the Prince of Wales, later George IV, for whom Mary gave up her career, her husband and her independence, only to be cruelly abandoned. This is her enthralling story: a tale of ambition, passion, scandal and heartbreak.

Dreams of Yesterday by Jill Barry

In the autumn of 1939, Charlotte is faced with running the family garage business when her menfolk join the Army. She swaps dungarees for pretty dresses when local funfair owner’s son Robert makes his feelings clear. Inevitably they’re parted but the coming months test Charlotte and make her much more appreciative of those around her. There’s joy when Robert is given pre-embarkation leave but darker days loom before hope and love triumph.

Beautiful widow Lydia Morgan is in Town steering her stepdaughter through the shoals of her first Season. Her most important task is to shield young Rose from handsome, charming rakes like Viscount Rothersthorpe. Only...the Viscount isn't interested in pretty young debutantes, and never has been. He's set his sights on Lydia, the one woman who, ten years earlier, almost tempted him to turn respectable.
www.annie-burrows.co.uk

Beguiling the Barrister by Wendy Soliman

Book two of The Forsters.

Flick—more properly known as Lady Felicity Forster—was twelve when she decided she was going to marry her handsome neighbor Darius Grantley. Now, embarking on her second season, she's no nearer to that lofty ambition. She commits to making Darius fall in love with her, if only he'd take a break from pleading the case of the common criminal as a barrister at the Old Bailey.

Darius adores the lovely, high-spirited younger sister of the Marquess of Denby, but he's all too aware that Flick is far above him in social status, not to mention fortune. Winning the high-profile Cuthbert case will earn him a promised appointment to King's Counsel and just enough income to provide a home for his well-born lady.

But the cards are stacked against him. Not only do the newspapers trumpet his clients' guilt, but a powerful peer bribes the witnesses and threatens Flick unless Darius sabotages his own case… 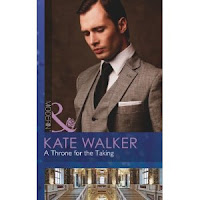 A Throne For The Taking by Kate Walker

Betrayed by those she loves, Honoria Escalona must now face the only man capable of bringing stability to the Mediterranean kingdom of Mecjoria. A cold, hard man who once called her his friend... Alexei Sarova-the true King of Mecjoria.

In exchange for her happiness

But Alexei's tortuous past has changed him into someone she hardly knows. He blames Ria's family for his bitterness, and his help-when he offers it-comes with a price: he'll take his rightful place as King with Ria as his wife, until she produces a true-blood heir...
Website   http://www.kate-walker.com

City Fiction
Paperback and kindle
6th June 2013
£7.99
Adrian Dexter is a corporate financier struggling through the turbulence of recession in 2012. Far away from the City of London, the love of his life waits for him in Johannesburg – as does his mortal enemy and notorious South African gangster, Nigel de Groot. As if that wasn’t enough, he is about to turn sixty.


When Adrian meets the beautiful Helen Greenwood and they embark on a passionate affair, he begins to feel young again. But his newfound happiness is about to be rudely interrupted...
Not only does Helen become pregnant – and there is doubt as to who is the father – but the mother is subsequently kidnapped as Nigel de Groot tries to hold Adrian to ransom. The rescue by DCI Sarah Rudd, now stationed at Islington Police Station, is dramatic and she is badly injured. She loses her libido and marital pressures follow.
De Groot returns to the UK and says that he’s going to kill Adrian. He offers him a clue: “Seventeen days to go. This webb never meant you to escape but don’t see red.” This defeats the brains of the Metropolitan police and a private detective agency.
DCI Rudd finally cracks it and races to a well known London landmark where she is to gain international recognition for what was later described as one of the bravest acts of courage ever committed by a serving police office.
Adrian, meanwhile, flies to Johannesburg to make a last desperate attempt to find happiness...pity about those nasty fatty deposits lurking under the surface.
As Sarah and Nick Rudd walk through St. James’s Park she has some interesting news for her husband.
http://www.tonydrury.com

As demons haunt medieval England, Geraint and Yolande rely on their love to survive.

The 1300s are a time of pestilence and unease, plagued not just by disease but by demons and the restless dead. Yolande wanders England and Wales, armed with her blessed bow and sacred herbs, laying the spirits to rest and driving the demons away. She’s bound to serve for a time of seven—though she knows not what that means.

Geraint the Welshman travels the countryside, juggling and tumbling to earn his keep. When he meets Yolande, he’s caught by her fierce yet sweet nature and vows to stay by her side. As they journey closer to Yolande’s final trial and face foes ever more cunning and dangerous, Geraint and Yolande have only their mutual love and trust to help them survive.

Marian Barr, dedicated concert pianist is engaged to world renowned conductor Georges Pascal the bad boy of classical music, but Marian has a secret of her own, one she thought no one knew about, until she starts receiving blackmail letters, threatening telephone calls and a stalker begins to follow her every move.

The final part of my Potteries series.

In 1952 William Cobridge has returned from a trip to America a different man.
Used to a life of luxury, he was sent away to learn about life in the real world. He meets Paula Frost on a visit to see her aunt, the housekeeper at Cobridge House. He is keen to see Paula again an asks her for a date. Could this be the start of  new romance? But things never go smoothly …

Be careful what you wish for…
Holly Grey only took up witchery to keep her friend out of trouble – and now she’s knee-deep in hassle, in the form of apocalyptic weather, armed men, midwifery…and a sarcastic Welsh journalist.

Kai has been drawn to darkest Yorkshire by his desire to find out who he really is. What he hadn’t bargained on was getting caught up in amateur magic and dealing with a bunch of women who are trying really hard to make their dreams come true.

A French Affair by Lucy Felthouse


Sydney Tyler is renting a barn conversion in Northern France, planning to spend the fortnight getting some words down on her novel. Unfortunately, construction work in the other half of the building puts an end to her peace and quiet. Genuinely upset that the builders are going to disturb her, the property’s handsome English owner, Harry Bay, offers to make it up to her. He’s a little flirtatious, and after spotting his wedding ring, Sydney keeps him at arm’s length. Sexy as he is, she has no intention of getting involved with a married man. But when Sydney learns the truth about Harry, will their mutual attraction spur them on to work through their emotional baggage and make this more than just a French affair?

The Aphrodite Touch by Romy Gemmell

Carla hopes that ten days on the romantic island of Cyprus will finally progress her relationship with reserved Scottish boyfriend, Jamie, to a full physical commitment. Or prove that they have no future together. But they had reckoned without the intervention of the goddess Aphrodite and her lover, Adonis. Will Aphrodite awaken Jamie’s hidden depths and allow him to return the passion that Adonis senses in Carla?
This is the first novella in my new Aphrodite and Adonis series.

The Sea Inside His Head – Theresa Le Flem


Posted by theromaniacs at 9:00 AM