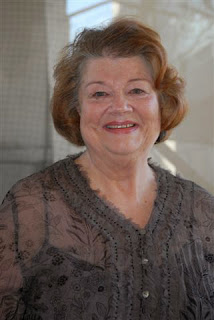 Catherine King comes from Yorkshire and was originally a university lecturer. She now writes Victorian and Edwardian novels, often described as ‘gritty’, inspired by her family history and the area of Yorkshire where she grew up.

What do you think is the most essential element of a good saga?

The essential element of a good saga is a rattling good story that keeps the reader turning the pages. Good stories are usually about determined people in challenging situations. I’ve written six sagas set in the mid 19th century and am currently writing books set in the early 20th century. This was a turbulent time for women and saw the emergence of a militant suffragette movement, the setting for my latest book.

Have you ever based one of your characters on a real person?

I never base my characters on real people, but a real person might inspire me with an idea for a fictional character.

This is easy. My all time favourite book is Jane Eyre by Charlotte Bronte. I read it at an impressionable age when I was at school and it has stayed with me ever since. It has all the elements of a good story

What was your worst subject at school? 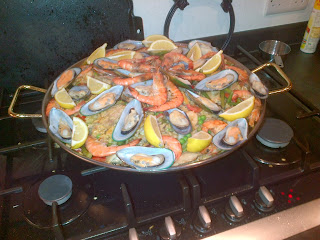 Without doubt my worst subject at school was Domestic Science. I was hopeless at it then and not much better now, although I have acquired a few more skills over the years. See my pic of a Paella I cooked recently for friends.

Actually it looks delicious, so what is the craziest ambition you ever fulfilled?

Well it wasn’t exactly an ambition but it was something I wanted to do. I used to scuba dive and was excited by an opportunity to dive at Bishop’s Rock Lighthouse, off the Isles of Scilly. It was quite a tough dive and I didn’t realize at the time how potentially dangerous it was. Even in calm weather there is always a sea swell over the rocks and strong currents in the underwater gullies. Many ships have foundered there over the centuries. I must have been crazy!

And what is your favourite guilty pleasure?

Must I confess to this? My favourite guilty pleasure is watching Emmerdale on TV. I’m addicted to it and if no-one else is about I’ll watch the repeats as well. My excuse is that it’s research because it’s full of rattling good stories.

A SISTER’S COURAGE is about the sacrifices, struggles and ultimate strengths of three women. 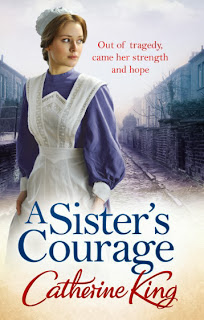 When her mother passed away, Meg Parker was forced to sacrifice her chance at love for the sake of her brothers. She hopes she will be able to live a full life once again after her father remarries – until tragedy strikes a second time. Suddenly, Meg is facing a darker future altogether.

Lady Alice Langton is travelling the Yorkshire Dales, spreading the suffragette message. Florence Brookes, the daughter of a prosperous grocer, accompanies her, impassioned by the cause but seeking distraction fro her own troubles. Appalled by their lack of domestic skills, Meg decides to flee her old life and joins the two women as their maidservant as they make their way to London.

When Meg is reunited with her old flame, she is hesitant about her feelings for him – not least because of the rift this causes between her and Lady Alice. It’s not until Florence’s actions land them in jeopardy that Meg realizes she must find the courage to make a heartbreaking choice.