Interview with Alison May

Today, we welcome Alison May to the blog. 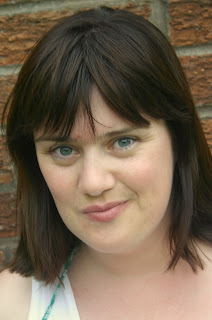 Alison grew up in North Yorkshire, and now lives in  Worcester. She worked as a waitress, a shop assistant, a learning adviser, an Advice Centre manager, a freelance trainer, and now a maker-upper of stories.  She won the RNA's Elizabeth Goudge trophy in 2012, and her winning story will be published in the RNA/Harlequin anthology Truly, Madly, Deeply in 2014.
She writes contemporary romantic comedies.

What (or who :) ) would you most like to find in your Christmas stocking?
What I really want for Christmas is a new computer. The one I’m writing on now is antique. It has a little man who has to shovel coal into its boiler to make the steam to make it go And the little man is tired, so very very tired. It’s probably time he retired to the countryside and concentrated on growing the perfect begonia. So, for the sake of the little man, a shiny new laptop please!

Who is your favourite hero? Your own, or another - or maybe both.
This is tricky. I’ve never really been a fan of the traditional tall, dark, handsome brooding hero with an air of arrogance and a certain cruelty in his gaze. That doesn’t mean I’m rejecting all the classic romantic heroes. I retain a sneaking fondness for Captain Wentworth, but generally I prefer a clever, possibly slightly nerdy, man. David Tennant or Matt Smith as The Doctor or, of course, Ben Messina, the mathematician hero in Much Ado About Sweet Nothing, would all do very nicely indeed.

What did you love most about your childhood?
I actually had a very nice and uneventful childhood with much to love about it. The thing I miss most, as an adult, is living by the sea. I grew up in Scarborough on the North Yorkshire coast, a town right on the edge of the cliff. Indeed some bits that were on top of the cliff when I was a child, have now fallen off the edge. I miss the unending open space of the sea being right on my doorstep, especially on slightly grey days when the sea and the sky would merge together into a massive great expanse of vastness.

Fictional characters have flaws. Do you have a flaw you'd like to be rid of?
No! I’m completely perfect in all my thoughts and deeds. So maybe, arrogance?

Do you have any phobias or superstitions?
I’m not superstitious. In fact I walk under ladders, invite black cats across my path, put shoes on tables etc. specifically to wind up superstitious friends. I do have on phobia though, and it’s a really awkward one that interferes with life. I’m terrified of driving. I passed my driving test about five years ago, but even now the idea of getting in a car on my own and driving, properly freaks me out. It’s something I very firmly intend to get over, and that is going to be my main New Year’s Resolution for 2014, just like is was in 2013, and 2012…

If aliens landed, which book would you recommend they read first. (Again, one of yours, and maybe one of your own).
Well, Much Ado About Sweet Nothing, obviously. And then after that, The House at Pooh Corner, which includes the story in which pooh-sticks is invented. I feel that any alien wishing to assimilate into human society should first learn how to play pooh-sticks. 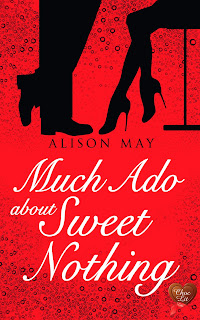 Is something always better than nothing?

Ben Messina is a maths genius and romance sceptic.  He met Trix at university and they have been quarrelling and quibbling ever since, not least because of Ben’s decision to abandon their relationship in favour of … more maths. Can Trix forget past hurt, or is their long history in danger of ending in nothing?

This is a fresh, funny, modern-day retelling of Shakespeare’s Much Ado About Nothing.

Thanks for taking the time to talk to us, Alison.  We wish you every success with Much Ado about Sweet Nothing, and with all your future books.

Interviews on the RNA Blog are currently carried out by Freda, Henri, and Liv. They are for RNA members, although we do occasionally take guests. If you are interested in an interview, please contact: freda@fredalightfoot.co.uk

Posted by Isabella Connor at 7:30 AM

Some very witty responses there, Alison. Makes me want to read Much Ado About Sweet Nothing all the more.

The concept sounds very witty but I can't imagine your hero being especially witty if he's a maths nerd. So that's spurred me on to check out the juxtaposition.

What a fun interview, Alison. If your novel is as lively as your interview responses, I'm going to love reading it.

I so agree with you about the aliens and House at Pooh Corner. Pooh Sticks should be declared our national sport - and could then go on to become a featured Olympic event - which we would win every time, of course.

Thanks for the kind comments. I don't think I've ever knowingly been witty or lively before so that's nice to hear.

I will put in a defense of the wittiness of mathematicians though. Dara O'Briain trained as a mathematician don't ya know?

Great interview Alison - I'm so looking forward to reading about your maths nerd! I also hope that poor man in your computer gets to retire very soon :)

A definitely clever witty interview, Alison. Well done, especially with the long-awaited publication of your book. I have now downloaded it by the way.

Enjoyed that interview. Yes, pooh-sticks are a must in the human psyche.

Interesting to find out more about you, Alison and your book will be the next addition to my TBR pile! I'll defend maths nerds too having been married to one for 30 years and he's got a great sense of humour and still makes me laugh every day:)


I'm not really a rom com reader, Alison, but your interview made me want to read your book. I so agree with you about living near the sea. Being a Liverpudlian, I can't imagine living inland. My two cousins who now live in America chose to live by the coast, one in New Jersey and the other in California. It's in the blood. I also liked your comments about Winnie the Pooh. I have my own which one of my sons bought me because I'd never had a teddy bear! Good luck with the book. June Francis

Love your fun interview and agree, about being by (or in my case,) near the sea.