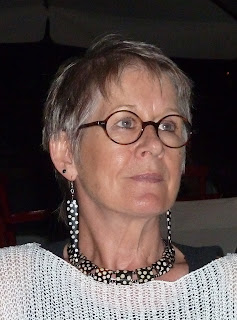 I didn’t go to university. I only studied English up to the age of sixteen, but I was always a story-teller. When I first decided to write seriously, I simply found a notepad and a pen, and started. It was only after I’d had two novels published that I began to take on board some of the ground rules of successful fiction writing. There are very many pitfalls and trip wires for the new author, and I’m sure I’ve fallen into, or over, most of them.

‘Point of view’ was something I knew about, but only in the sense that I understood what was meant by this term.  I’d read and enjoyed many multi-faceted novels, told from a variety of viewpoints. But I hadn’t understood or mastered the skill and craft required to make such an approach work seamlessly. The vital importance of keeping a grip on POV was an aspect of writing that had simply not occurred to me.

At the start of my writing career most women’s fiction was written solely in the third person, from the viewpoint of the heroine. I’m not a natural rebel so, for the majority of the action in my early books, I too followed the heroine, telling her story in the third person. But when there was something I wanted my reader to know, something my heroine had neither seen nor understood, I used a scatter-gun approach, going to whichever character was in possession of the facts. Head-hopping is a bad habit that very often afflicts novice writers, and I embraced it wherever necessary, but if I couldn’t use another random ‘head’ from which to convey important messages to the reader, I’d simply drop the information into the narrative. The use of the God-like authorial voice is yet another story-telling method disapproved of in contemporary commercial fiction writing (in literary fiction you can get away with anything.) And if there were things I didn’t want my reader to know yet, like the fact my hero really really fancied my heroine, I just kept quiet.

For very many reasons, which I won’t go into now, Fly or Fall, was written over a number of years. I started and stopped and started again. But at the time I began it, I was at least in possession of some newly absorbed wisdom about the craft of writing. Fly or Fall is a complex story with a larger cast of characters than I’d previously handled. I knew that each of the protagonists had a history, they each had flaws and failings, they each kept secrets. All, that is, apart from my heroine, Nell. She is straightforward, principled and honest. It never crosses her mind that others are not like her; that the people in her life might deceive and hide and lie. She’s not stupid, but her default position is to take life at face value - to believe others’ accounts of themselves. It’s not until halfway through the story that Nell begins to comprehend that she has been massively duped. Some of the deceptions are serious, some trivial, and in some respects she’s deluded herself. But, like a house of cards, take one support away and everything begins to topple.

I had faith in my story, but although I was now very much more aware of what I was doing - solely telling the story in the third person, through Nell’s eyes - it sat leadenly and lumpily on the page. A plate of cold porridge springs to mind. One problem was the back-story. It was important. I needed to convey it. But it was complicated. There were far too many conversations of the “Didn’t you know that...?” variety. I realised I had to do something radical. I started by asking myself some ‘back to basics’ questions. For example, does Nell, and, by extension, my reader, really need to know this yet ... in fact, do they really need to know it at all?

After the brutal cutting, I began to question the point of view. Not the direction from which the story is told, I knew it was Nell’s, but I wondered if the use of third person was hampering its direct communication to the reader. I put the whole of the manuscript into the first person - initially just to see what difference it would make.

It used to be an accepted wisdom that the readers of women’s fiction are resistant to novels in the first person. They won’t buy them in the same numbers, apparently. I don’t know if this is still true, but even if it is, getting the story right was far more important to me, than any theoretical commercial advantage. To my delight, when ‘she’ became ‘I’, Fly or Fall flew.

Fly or Fall follows the dismantling of all of Nell’s certainties, her preconceptions and her moral code. Unwelcome truths about her friends, her husband, her teenage children and even herself are revealed. Relationships are not what they seem. The hostility between brothers is exposed and finally explained. And the love that blossoms unexpectedly from the wreckage of her life is doomed, as she acknowledges the hair’s breadth between wishful thinking, self-deception and lies.

By the conclusion of Fly or Fall everything has altered for Nell, the woman who doesn’t like change. But she has rebuilt herself as a different person, a braver person, and she has embarked with optimism on a totally transformed life, a life that offers the chance of love
. 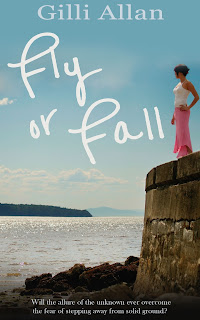 Blurb
Wife and mother, Nell, fears change, but it is forced upon her by her manipulative husband, Trevor. Finding herself in a new world of flirtation and casual infidelity, her principles are undermined and she’s tempted. Should she emulate the behaviour of her new friends or stick with the safe and familiar?

But everything Nell has accepted at face value has a dark side. Everyone - even her nearest and dearest - has been lying. She’s even deceived herself. The presentiment of disaster, first felt as a tremor at the start of the story, rumbles into a full blown earthquake. When the dust settles, nothing is as it previously seemed. And when an unlikely love blossoms from the wreckage of her life, she believes it is doomed.
The future, for the woman who feared change, is irrevocably altered. But has she been broken, or has she transformed herself? “

About Gilli Allan
Gilli Allan started to write in childhood, a hobby only abandoned when real life supplanted the fiction. Gilli didn’t go to Oxford or Cambridge but, after just enough exam passes to squeak in, she attended Croydon Art College.

She didn’t work on any of the broadsheets, in publishing or television. Instead she was a shop assistant, a beauty consultant and a barmaid before landing her dream job as an illustrator in advertising. It was only when she was at home with her young son that Gilli began writing seriously. Her first two novels were quickly published, but when her publisher ceased to trade, Gilli went independent.

Over the years, Gilli has been a school governor, a contributor to local newspapers, and a driving force behind the community shop in her Gloucestershire village. Still a keen artist, she designs Christmas cards and has begun book illustration. Gilli is particularly delighted to have recently gained a new mainstream publisher - Accent Press. Fly or Fall is the second book to be published in the three book deal.

It’s been fascinating reading about how you found your own ‘voice’, Gilli. Thank you for joining us today

The RNA blog is brought to you by
Elaine Everest & Natalie Kleinman
If you would like to write for the blog please contact us on elaineeverest@aol.com

Thanks for having me on the blog. Interesting that POV is actually being talked about on ROMNA at the moment. I suppose it's a subject that never goes away.

Thanks Georgina. It's horses for courses, I suppose. What works best in one book, won't work so well in another.
gx