Spotlight on the Sparkling Romaniacs

Anyone attending the recent RNA Conference couldn’t have failed to notice The Romaniac’s ‘Sparkle Spotlight’ event. We asked the ladies to tell us more about the glittering affair. 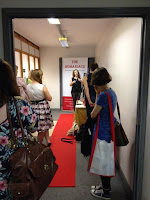 At the 2015 RNA Conference, The Romaniacs collectively decided to put together a Sparkle Spotlight corner to video some of the delegates and find out a bit more about them. The Romaniacs are eight writers all of whom were members of the Romantic Novelists’ Association’s New Writers’ Scheme and joined together to support each other and blog about their progress.

In December last year, we all met up and had a pre-Christmas weekend, which we named our sparkle weekend and we all came away inspired with lots of ideas. One of those was our Life Cycle Of A Writer feature. Every week, on an eight week cycle, we each do an update on how things are going and we try to feature all aspects of our writing lives. From this, the idea for The Romaniacs Sparkle Spotlight Corner formed. It was a way of saying thank you to the RNA and its members who’ve been so supportive to us and in turn we got to find out about their life cycle as a writer: the highs, the lows, and what they are currently working on.
Having come up with the idea, we contacted the conference organisers (Jan Jones and Jenny Barden) to see if it was possible, and with their approval, we become part of the conference programme.
We got ourselves organised behind the scenes, working out how many appointment slots we could offer and sorting out what equipment would be needed. Posters were designed by Sue Fortin and tickets sent to all those taking part.

Then the conference arrived! The prosecco and chocolates were chilled – we were ready. Originally the plan had been to video in the coffee break area, but the sound of 200+ novelists chatting would have drowned out our interviewees. So instead we camped outside the one-to-one rooms in an area that was just perfect for our red carpet. It also meant that we managed to interview some industry professionals, which was an added bonus. We soon found out Celia J Anderson is a natural interviewer and we all need to work on our clapper board action.

Once home, it was Laura E James who sat down and edited the final videos. She spent a couple of days doing it and we owe her a big thank you for carrying out undoubtedly the most complex of the tasks.
Here is the conference video we put together: https://www.youtube.com/watch?v=hBKFM12lUEw 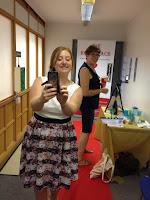 It gives a real feel of what it was like to be there. The interview videos have been featured on The Romaniacs blog over the past week with more to be released. Hopefully that’s coffee break entertainment covered for a while. It was really a privilege to hear what a whole range of writers have been up to. We’re a talented, determined bunch in the RNA.
And as it’s been so popular, there’s already talk of it happening again next year. So if you are going to conference next year, make sure you sign up for The Romaniacs Sparkly Red Carpet!
Love,
The Romaniacs

Thank you ladies, be assured The RNA blogging team will add their names to your list for next year!

If you wish to be featured on the blog please contact us on elaineeverest@aol.com

Many thanks for having us, and thank you to everyone who has taken part in our interviews, viewed and shared.

I mentioned it on Twitter, but I found - as a new starter (so to speak) there is something to be learned from EVERY one of the interviews!
So well done you!!

Thank you, The Romaniacs, for a really good idea. It was great fun to be one of those interviewed, and to see the results for all the other interviewees. Fab idea!!

Thank you so much, Romaniacs, for all the hard work that went into this. I tentatively took part in case I never got another chance and although it was a scary thought, you all made it so easy and were so professional in your filming!

Thank you Romaniacs for such a fun series of Vlogs. If you're there next year I will certainly seek you out. I learned so much about friends and favourite writers through your series of Vlogs. I'm sure it was lots of hard work but you can tell from the comments that it was appreciated.

Thanks from me too – I very much appreciate your efforts, loved joining in, and have been really interested to hear everyone’s answers.