Janet joins us today with tales of her journey as a teenager overland to India and how it led thirty years later to her novel, The Vanishing of Ruth.

Aged 18, I boarded a bus in London bound for Kathmandu and spent four months travelling overland. Over 30 years later, the trip was the inspiration behind my mystery/romantic suspense novel The Vanishing of Ruth. For all of you who enjoy arm-chair travelling or are nostalgic about past travel on the overland route to India, you may have tuned into BBC Radio 2's recent programme, ‘Magic Bus’ (narrated by Tony Wheeler of Lonely Planet fame). It featured music from the hippy trail – what was played aboard the buses and along the route – as well as interviews with travellers such as myself. I contributed with anecdotes and extracts from my travel diary: a teenager’s wide-eyed observations of a vanished world in which young western travellers went east to experience different cultures, live more simply and have fun. I was inspired by stories from my mum and grandparents of their life in bygone India where my grandfather had been a conservator of forests, and my adventurous Granny went out to marry him and live an itinerant life among the Himalayan foothills.

My mum had tales of pacing the length of a man-eating tiger’s entrails and watching soup being sieved through a turban. The head of said tiger greeted us in the entrance of my grandparents’ home in Edinburgh. The Beatles had hung out in India and it had changed their music; books such as EM Forster’s Passage to India whetted my appetite for the mysticism of the subcontinent. India beckoned, and so I went!

The Vanishing of Ruth switches between the hippy trail in the 1970s and the present day. 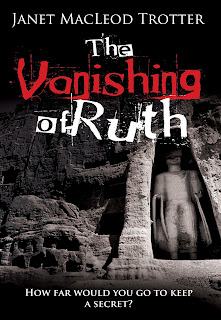 1976: friends, Marcus and Ruth, go missing in Afghanistan during an overland bus trip to Kathmandu. A generation later, Ruth’s niece Amber, haunted by the disintegration of her family, determines to get at the truth of their disappearance. Was it murder, as her father suspected, or a suicide pact as the police believed?

Tracking down the trip’s bus driver, Cassidy, Amber starts to piece together a lost world - the mystical vibrant hippy trail to India – and colourful characters like Juliet, who imagined herself the reincarnation of an Edwardian traveller. As the mystery surrounding her aunt and the charismatic Marcus unfolds, Amber begins a journey of discovery of her own, that will lead her not only into the dark secrets of the past and lost love, but face to face with a tragedy much closer to home.

This was my first novel as an indie author five years ago (after fifteen years with Headline as a Saga writer) and became a bestselling ebook on Waterstones online in both Romance and Crime categories. My friends in the Border Reivers chapter of the RNA supported me greatly through the transition to self-publishing, and I've since had many best-sellers on Amazon. I'm now a hybrid author, with foreign editions being sold through the Madeleine Milburn Agency who has made me a bestseller in France and Russia!

The Magic Bus programme is available on iPlayer until the end of August:

Thank you, Janet, for sharing your past and present adventures with us.

It really does sound utterly fascinating, Janet, as does your life and your family history. I can see why people wanted to read it! :) x

Fascinating.
There are 9 days left to listen to 'The Magic Bus' apparently. Have just checked.
Thank you for the link!

Do you have a connection with Beamish Museum? I could swear I saw this book in the gift shop there this afternoon!

A fantastic story. Thank you for sharing it with us. x

This sounds such an exciting book. Such things as seeing soup being sieved through a turban are the sort of first hand experiences that can bring a book alive.