It's a great pleasure to welcome the Chelmsford Chapter to our series. Carrie Elks was kind enough to answer Jean Fullerton's questions.
Welcome to the RNA blog, Chelmsford members!

Where are you based, Carrie? 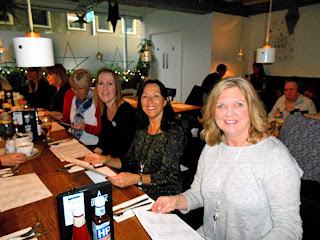 We are the Chelmsford Chapter, based in Essex. You don’t have to live in Chelmsford to join us though, you just have to get here by train, plane or automobile!

How long has your chapter been running?
Around ten years. We began as a casual group of romance writers meeting for lunch, and only later became a chapter of the RNA. Since then, the chapter has grown, but some of our founding members still remain.


How often do you meet?
We meet on the last Thursday of each month. The dates are published in advance, but we also send out an email reminder (because we’re all busy writers!)

Where is your regular meeting place?
We’ve just moved to a new venue. We now meet in A Canteen in Chelmsford, a delightful delicatessen and café.

How many members attend your meetings?
It varies from month to month. Sometimes there can be only six of us, and other times (especially at Christmas) we can number up to about twenty. There’s no pressure to attend monthly, just whenever you can.

Do your meetings include a meal?
Yes, the food in A Canteen is very nice, and the atmosphere is lovely. We find chatting over lunch is a great way to share our thoughts and news.

Is your chapter open to non-members of the RNA?
Though we’re primarily members of the RNA, we do have a few chapter members who are no longer part of the organization. We are all writers though – whether at the start of our careers, or well-established. 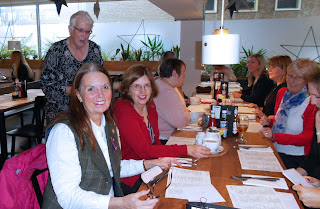 How long are your meetings?
This varies, too. We meet at 12 noon, though some members arrive a bit later due to public transport restrictions. We’ve usually finished around 2:30pm (perfect if you need to pick up children from school) but nobody worries if you need to leave earlier. We’re very relaxed!

Can you give an outline of speakers/guests you’ve had in the past year?
We’re primarily a support group, so haven’t had any speakers in 2016. However, we did help to organize the Colchester Cream Tea in April this year, which was a lovely event for all involved.


What do you have planned for 2017?
I’m just working on that now. We’ve had a fabulous new bookshop (Foyles) open up in our city, and it would be good for us to forge some closer links with them. Apart from that we’ll be doing our usual plan of eating, talking, and having fun!

What would you say makes your chapter of the RNA so special?
Probably the same as all chapters – the people. We are a varied bunch. We range from authors on the New Writers' Scheme, to those who have been published for decades. Each of us brings something unique to the group, whether it be experience of the publishing industry, knowledge of digital marketing, or connections that might help a fellow writer. I only joined a year ago, and I immediately found the chapter to be very welcoming and generous with their support. It’s great to spend time with like-minded people.

Who is the contact for new members?
Me! (Carrie Elks) I recently took over as the organiser for our chapter, and am enjoying it immensely.
I can be contacted by email: Carrie.Elks@mail.com or by telephone 07530 859769

Thanks so much for joining us, Carrie!

Jean was born in East End of London and spent all her career as a district nurse in East London but is now a full-time writer. Wedding Bells for Nurse Connie, is her current release. Her next novel Pocketful of Dreams, set in the turbulent years of WW2, is due for release in June 2017 and is the first in next East London series.
Her first series with Orion Fiction was set in the Victorian period after which she jumped forward to post-war East London.
She is a proud graduate from the NWS and passionate about the local chapters, which is why she has taken on the role of Chapters Liaison.