Emily Kerr: My route to publication

It is always a delight to feature new authors and today is no exception as we introduce Emily Kerr to the RNA blog.

My name is Emily Kerr and my debut romantic comedy ‘Who Does He Think He Is?’ is published by 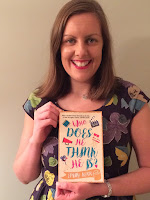 Crooked Cat Books. I live and work in Yorkshire, and my day job is as a journalist for regional TV. So I basically spend work hours writing factual news scripts and then squeeze in the fiction writing during any spare time I can find!

I’ve always wanted to be an author, and some of my earliest memories are of sitting in the back of the car on the way to primary school asking my mum to spell out words for the stories I was writing. Ever since then, I’ve tended to have several writing projects on the go at once. I also confess to having a terrible habit of writing thousands of words of one book, then moving onto a shiny new story and not finishing it.

I wanted something to help me find my focus, and so a couple of years ago, I joined the Romantic Novelists’ Association New Writers’ Scheme. The NWS encouraged me to concentrate my efforts on one particular story, which became my debut romantic comedy ‘Who Does He Think He Is?’

The book is set in the beautiful Yorkshire Dales, and is all about Lady Aurelia Osbourne-Lloyd whose stately pile is actually more of a pile in a state.  She’s trying (and failing) to turn the family fortunes around by welcoming tourists to the house. When a Hollywood production company chooses the estate as a location for a Regency movie, a whole new level of chaos enters Aurelia’s life, especially as it seems the leading man may have an ulterior motive for wanting to get close to her.

I’m a big fan of the movies and find what goes on behind the scenes really interesting. I’m lucky enough that the newsroom where I work shares its home with the studios of a popular TV soap. This means that I keep on getting tantalising glimpses of the crazy world of television drama production. It also means that sometimes I’ll pop to the canteen and there’ll be six “police officers” and three “hospital patients” queuing for coffee because they’re filming some kind of disaster scene! The world of make-believe looks fun, but it also seems pretty full-on and definitely rather hectic at times. I started wondering what it must be like to have a film unit appear at your home and take over, and ‘Who Does He Think He Is?’ evolved from there.

The August deadline of the New Writers’ Scheme definitely appealed to my journalist side and gave me something to aim for. The advice and support from my reader was invaluable. I tightened up the manuscript, plucked up my courage and started entering writing competitions. I was absolutely thrilled when ‘Who Does He Think He Is?’ was named runner up in the Festival of Romance New Talent Award, and was shortlisted in Choc Lit’s Search for a Star competition. Those successes spurred me on and I started submitting my book to publishers.  Putting your work out there is quite a daunting and scary process, so it was really great to feel I had the support of RNA friends met through ROMNA, the RNA conference and the York tea party. When I finally got The Call offering a publishing contract, I was so thrilled I did a little dance, much to my colleagues’ amusement!

My road to publication has so far been a really exciting journey. I’m already at work on book number two, and I can’t wait for the next stage of my life as an author.

About ‘Who Does He Think He Is?’
Lady Aurelia Osbourne-Lloyd has long wished her bank balance was as big as her name. But her home, Leydale Park, is more of a pile in a state than stately pile, and with her father off ‘finding himself’ in Thailand, it’s up to her to turn the family fortunes around by entertaining demanding tourists.
When – thanks to her father’s interference – a Hollywood production company chooses the estate as a location for a Regency movie, a whole new level of chaos enters Aurelia’s life. Her quiet days shattered and privacy non-existent, she has no choice but to go with the flow and let them take over.
Never mind the added distraction of dishy leading man, Xander Lord, who may have an ulterior motive for wanting to get close to her…
Can Aurelia keep her cool in light of all the upheaval?

About Emily:
Emily Kerr has been scribbling stories on bits of paper all over the place since she learnt how to write. She earns her living as a journalist and loves the interesting variety of people she gets to talk to on a daily basis.
She can generally be found with her nose in a book, or hunched up over her laptop typing away, though she has been known to venture outside every so often to take part in various running-based activities. She is also learning Greek for the day when she finally does a Shirley Valentine and swaps her home in Yorkshire for sunnier climes.
Her debut romantic comedy ‘Who Does He Think He Is?’ was named runner up in the Festival of Romance New Talent Award.

Thank you, Emily, and good luck with your book.