Today we welcome Lesley Cookman to the blog. Many of us can relate to Lesley’s ‘journey’ to becoming a full-time writer. Being in the right place at the right time or perhaps just falling into the job – whatever the reason this is how many of us became jobbing writers. Hats off to Lesley for her wonderful achievements.

I still find it slightly startling to see myself alluded to as a “well-established writer”.  I suppose I am, 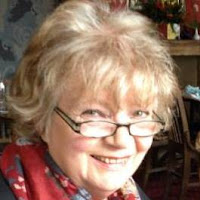 but there’s part of me that feels I should be as well known as, say, Neil Gaiman, or our own Katie Fforde before I lay claim to the sobriquet “well established.”

For those young things (or maybe not so young) who have come to the RNA more recently, I shall explain myself.  I started off almost by accident. Married to the art editor of Which Computer magazine when desktop computers were still practically in the foetal stage, let alone infancy, I had scribbled away since I was a child, like a lot of us. One day, husband brought home a great big cardboard box and said: “Open that, put it together, read the instructions and then write an article on it saying how easy it was.”

I did it. Not without difficulty, but I did it. I can’t even remember what flavour the computer was now – could have been Apricot. (Yes, there was one.) That led me to becoming a freelance for the whole group, which included Which Computer and Business Matters. This, bear in mind, is over 35 years ago. So I carried on. I wrote for them, I edited two magazines, The Call Boy – the journal of the British Music Hall Society – and Poultry Farmer Weekly. Yes, I know. I wrote for anyone who threw me a commission. I was a writing whore. I did a lot of PR, particularly for musicians and local theatre, I branched out into writing pantomimes for the other side of my life, the theatrical side. One day, after having  been commissioned to write a book on how to write a pantomime, I was asked by a Comedy Writers’ Convention to be a key speaker – on panto. Naturally. I met Marina Oliver, who was also there and remembered my name from when I, along with thousands of others, had thought perhaps I could write a Mills and Boon. “Join the RNA again”, she said. “It’s fun.” So I did. How she squirrelled me past the NWS watchdogs I can’t now remember – I think I dug up the partial I’d sent off previously and sent it again, to comply with the rules.

Then I met another writer who had written for the same “How To” publisher I had – only she was writing about Twist In The Tail stories. She gave me a copy of her book, which also contained a list of current fiction editors. I read the book, got an idea while reading it, sent it off, and bingo.

And finally (at least, I hope it isn’t finally) I decided to go off and do a Master’s Degree. The only good thing I got out of that was that Hazel Cushion was also on the course. Together, after we finished the course, we produced a charity anthology, Sexy Shorts For Christmas. I, by now, had a lot of writer friends, whom I cajoled into giving me short stories for Breast Cancer, my husband designed the cover and I typeset. It was all a great success, and Hazel decided that’s what she wanted to do with her life.

Two years later, she asked me if I’d written any more of the dissertation I’d written for the MA. I hadn’t, but I wrote a little more, she bought it and asked if it could become a series. We both took a chance, and luckily, it paid off. I can say quite definitely that I would not have become an author if it wasn’t for Hazel and Accent. No one else would have taken a chance on a gentle(ish) amateur sleuth novel – they weren’t even called “cosy” in those days.

So, keep going. There are many roads to travel... 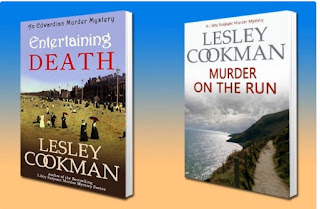 Thank you, Lesley. What an exciting ‘journey!’

If you are a ‘well-established’ author and would like to be featured on the RNA blog please contact us on elaineeverest@aol.com
Posted by Elaine Everest at 10:00 AM

Always interesting to read and I enjoy your books too Lesley. Thanks so much. I have had a subscription to Which? and the Computer section...I never knew.

Really interesting and informative. Thanks a lot, Lesley.
Gabrielle x