Character is King - A Writing Tip from Amanda Grange

Amanda Grange writes adventurous historical romances set mainly in the eighteenth and nineteenth centuries. She also writes books that tell the stories of Jane Austen's novels from the heroes' points of view. Her lastest book, MR DARCY, VAMPYRE - an immortal sequel to PRIDE AND PREJUDICE, is released next month in the UK and currently available in the US.
Below, Amanda shares a writing tip for those times when you are stuck.

I started writing seriously about 10 years ago, having scribbled for many years before that, and I think the most valuable lesson I’ve learned is that character is all important in a novel. If I’m stuck these days I don’t ask myself what happens next, I ask myself, What would the characters do next? It’s a small difference but a very important one.

It took me years to start thinking like this but it’s probably the most useful thing I ever learned. It helps me when I’m stuck and it helps me when a chapter isn’t working.

I’ve just finished a novel called Mr Darcy, Vampyre, which is a Gothic sequel to Pride and Prejudice (out August) and there was a section in the middle where I could tell a chapter wasn’t working. Instead of trying to change the plot I thought more about the characters. They were outwardly small landowners, the equivalent of the English gentry, living in a remote part of the Alps, but unbeknownst to Elizabeth they were also vampyres. I didn’t want her to find out at this stage so I couldn’t have them doing anything that would reveal their true natures. I asked myself what they might spend their time doing and I thought of all the usual things the landed classes did in the early nineteenth century – riding, visiting neighbours, going to private balls, hunting – ah! hunting. As soon as I thought of it I knew I’d hit on the right idea. It would give me the perfect opportunity to introduce a double edged conversation which would really give point to the section:

‘What a morning we have had of it!’ said Gustav. ‘The best sort in many a long day. There is nothing to beat a bright autumn morning when the air is crisp and the blood is flowing with the thrill of the chase. We must persuade you to hunt with us tomorrow, Darcy, and Elizabeth, too.’
‘Elizabeth does not hunt,’ said Darcy sharply.
‘Then you must teach her.’

So my advice to anyone who is stuck is to think of the characters then make a list of all the things they might be likely to do in a given situation, as well as jotting down their hobbies, work, friends etc, and a convincing way of moving the story along will usually emerge. Sometimes it will throw up unexpected ideas but, always, it will throw up convincing ones, because as long as the characters convince, the book will also do so. 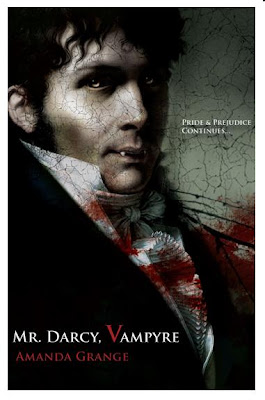 Amanda's website has details of her other books and has a really useful section filled with writing help. For more information on MR DARCY, VAMPYRE visit the book's blog .
Posted by Unknown at 9:30 AM

This is fantastic advice. It is something that I am going to scrawl across the top of my notes page, along with SdT!
Also I can't wait to read Mr Darcy, vampyre, two of my favourites, vampires and er Mr Darcy!