One of the treats of the conference is that the winner of the Joan Hessayon New Writers' Award gets presented with the beautiful cup for a second time - now with their name on it. So here's a photo of Katie Fforde giving Allie Spencer the newly engraved cup for her first book TUG OF LOVE (also in the picture is the wonderful Jan Jones who won the award in 2005 for her novel, STAGE BY STAGE. She is also one of the two people, Roger Sanderson - the other, responsible for the brilliant conference)

Huge Appologies - the following report is from Liz Gill not as stated before! 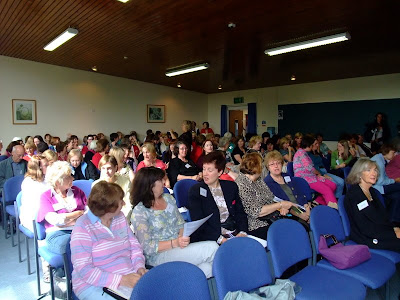 Monday, July 13th
I felt guilty at the conference, sitting in stuffy halls in one of the most beautiful places on earth on one of the few sunny summer weekends of this year. I could have been walking around Grasmere, eating peaches by the lake and watching my cousin’s black Labrador, Fern, run in and out of the water after imaginary pheasants. I could have had tea and carrot cake in a little courtyard café while the stream flowed past, the Methodist chapel glowed in the sunshine and spuggies sat on the tabletops, wide eyed and eating crumbs.
I had intended leaving the conference at lunchtime on Sunday and driving, roof down, across to the Durham dales to where I have a static caravan, to gain the rest of the day but instead I stayed to hear Rachel Summerson reading her childhood efforts at novel writing and Jean Fullerton talking about the research she does for her historical novels in East London. Rachel made me laugh more than I have done in weeks and Jean inspired me and made me want to start writing as soon as I got home and it was well worth the sacrifice of the outdoors both then and on Friday and Saturday, listening to the talks, seeing old friends and making new ones.
I am sitting outside my caravan now in the morning sunshine. At least I didn’t have to get up early today but I feel a slight pang for that too because I remember the lovely lady serving breakfast and saying when I asked for one egg,
‘Why don’t you have them both? There’s only two and this one would feel lonely without the other.’
So I did. 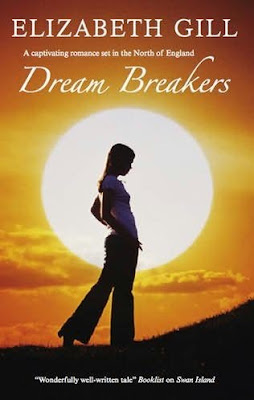 Elizabeth's latest book DREAM BREAKERS
1967: Jenna Duncan's only ambition is to marry the boy she loves and have a little terraced house away from her dull job and her parents' boring life. Ruari Gallacher has other ideas. He wants to be a professional footballer. Winners and losers can change places but when you have sacrificed the person who matters most to you can it ever work out?

More attendees are posting their conference experiences, photos, and reports on their blogs. Today Carol Townend has posted her notes from Jessica Hart's session. All the links are listed on the yesterday's post here and will be updated daily with new additions.

Keeping on the conference theme, tomorrow's post is from attendee Anna Louise Lucia, resident of the Lake District, will sharing one of her tips which never fails to get the writing flowing again.
Posted by Unknown at 8:27 AM

So wonderful to be able to catch up on all the conference news. Thanks.

"The Hong Kong Connection" is a legal thriller about a gutsy female attorney who takes on high ranking International officials. It's a taut, rollercoaster of a ride from New York to Palm Beach to Washington D.C. to Hong Kong. The plot is expertly woven, the characters persuasive, and the dialogue snappy and spot on.
www.StrategicBookPublishing.com/TheHongKongConnection.html