A Bitter-Sweet Tale of Valentine's Day From Jill Mansell

Best selling author, Jill Mansell, whose book RUMOUR HAS IT is short listed for the RNA's Rom Com shares a Valentine's Day of hers that didn't bode well for the perfect romantic ending...

Many years ago my first husband gave me a bracelet-sized jewellery box on Christmas morning. When I unwrapped and opened the box, it was empty. (He thought it would be hilarious to see the look on my face. The bracelet was actually hanging up on the Christmas tree. Oh how I laughed.)
Anyway, a year or so later we went out for a posh Valentine's dinner together at the hotel where we'd had our wedding reception. In the middle of the meal he suddenly produced a ring-sized jewellery box and presented it to me. Since he wasn't the overly romantic type, it was completely unexpected. Everyone else in the restaurant thought it was wonderful and was watching avidly. I was mortified, convinced that if I opened the box, it would be empty and he would say cheerily, "Only joking!"
So in an effort to avoid public humiliation I refused to open it.
He insisted I did.
I refused again. And again. And again.
The whole restaurant was by this time agog.
In the end he had to open the jewellery box himself and shove the beautiful diamond eternity ring onto my finger.
Everyone applauded.
But when the trust has gone, it's gone. We divorced (very amicably!) the following year. 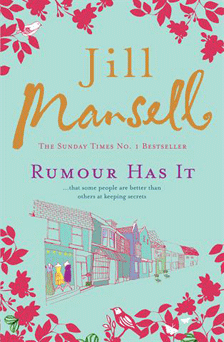 When newly single Tilly Cole impulsively quits her London job for a fresh start in the small town of Roxborough she finds she's arrived in a hotbed of gossip, intrigue and rampant rivalry for the most desirable men. Tilly has no intention of joining in – she's just happy with her new Girl Friday job.
Then she meets Jack Lucas.
Jack is irresistible… and he's got his eye on Tilly. But there are shocking rumours about his wicked reputation. Tilly doesn’t want to be just another notch on anyone's bedpost. But is she being mature and sensible – or is she running away from the love of her life?
www.jillmansell.co.uk
Follow Jill on Twitter @JillMansell