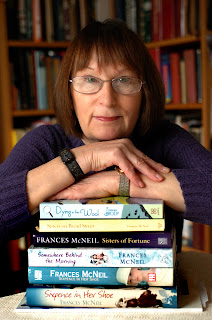 Frances Brody’s crime novels are set in 1920s Yorkshire and feature Kate Shackleton, a First World War widow turned sleuth. Writing as Frances McNeil, Frances published four sagas and won the HarperCollins Elizabeth Elgin Award for the most regionally evocative saga of the millennium with Somewhere Behind the Morning. She has written extensively for radio, theatre and television, and was nominated for a Time Out Award. Frances lives in Leeds and when not writing, she reads, watches television, practises yoga, walks in the Dales, and spends time with family and friends.

Welcome to the RNA Blog, Frances, I believe your writing life started with radio and TV scripts. How did that come about and what were the particular challenges?

When I started writing, I was thrilled to have my sketches broadcast on The Northern Drift, a programme that gave opportunities to many writers at the start of their careers, produced at the BBC in Leeds by Alfred Bradley. I caught the knack of writing for radio and my short stories were accepted for the BBC Morning Story slot by a Manchester producer, Gillian Hush. My first radio play, THE SUN AND THE DEVIL, was based on the story of the Pendle witches. Setting, characters, plot and a strong idea were all there. Alfred Bradley sent some of my work to a television producer and commissions followed. I also found a niche in BBC Schools and enjoyed writing history and drama programmes. It was good training because often I had to work under pressure, and be very conscious of story structure, timings and clarity.

Your first novels were sagas, tell us about those and why you eventually turned to crime?

My mother’s family stories provided the basis for, SOMEWHERE BEHIND THE MORNING. Perhaps because I was used to scriptwriting, I chose the first person, present tense. (Later changed to past tense at the suggestion of my agent). My sagas are set in the twenties and thirties, in Yorkshire and Lancashire. In SISTERS OF FORTUNE, the daughter of a banker and the daughter of the bank commissionaire take turns to tell the story. If you write about a bank, there must be a robbery. If there is a robbery, perhaps there will be a murder. I turned to crime for the next book, DYING IN THE WOOL.

Does romance play any part in your crime stories?

Yes! Love and lust are such powerful motivations. 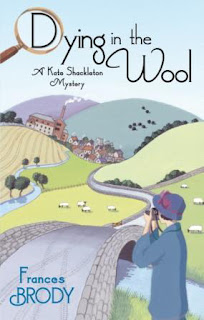 Your crime novels are set in 1920s Yorkshire. What was the attraction of this period and setting for you?

We are all influenced by the stories we hear as children. I used to stay with an old lady, a courtesy aunt, Amy Barker. The twenties were her period and she never tired of talking about the old days. Although I have travelled and lived in other places, I always come back to Yorkshire – a diverse and surprising county.


As a busy writer with many strings to your bow, how do you organise your day? Tell us something of your work schedule?

I usually start work at about 8 or 9 in the morning. It helps if I’ve stopped at a point where I know I can pick up straight away. That doesn’t always happen as I may think of something very urgent that I have to do, such as fill the washing machine or put peanuts out for the birds, and then wait to see which birds come first. I try to press on with the draft as far as I possibly can. If there’s a sticking point, I’ll try to move on and come back to it. At present, I’m reading through a draft of the next novel, with a cruel red pen in my hand.

If you were starting out afresh what advice would you give yourself as a fledging writer.

If someone gives you an opening, or a piece of advice, try and understand what’s behind it. Stan Barstow once said that booksellers were never quite sure how to classify his novels. Be clear about your genre. When I was writing for theatre, a well-known actor asked me if I had ever been to the Riverside Theatre, where she was working on a new project. I told her that I rarely came to London because I had to walk my dog. Oh dear.

Which character from your many books would you most like to trade lives with?

My sleuth, Kate Shackleton, but I’m not as clever as she is so some mysteries might remain unsolved.

Oscar Wilde said he could resist anything but temptation. Which temptation do you find the hardest to resist?

I have a terrible tendency to make soup, whether anyone wants it or not.

I’m revising my draft of the fifth Kate Shackleton murder mystery, to be delivered early February. I daren’t tempt fate by saying more. 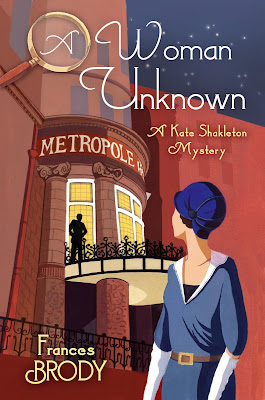 Deirdre Fitzpatrick is married to a man who wants to know where she really goes when supposedly taking care of her sick mother, and calls on the expertise of Kate Shackleton, amateur sleuth extraordinaire, to investigate.
THE GENTLEMAN Everett Runcie is a banker facing ruin and disgrace. His American heiress wife will no longer pay for his mistakes, or tolerate his infidelity, and is seeking a divorce.

THE MURDER When a chambermaid enters Runcie's hotel room, she is shocked to find that he is alone, and dead. Suddenly Kate is thrown into the depths of an altogether more sinister investigation. Can she uncover the truth of her most complex, and personal, case to date?

Thank you for sparing time to talk to us today Frances. We wish you continuing success with your books.
Best wishes, Freda

Some great advice, Frances! And there can NEVER be too much soup...

I love the Kate Shackleton mysteries. They are one of my favorite series. I hate that they aren't all released here in the US like they are in the UK, but I can't wait to read them.

Thanks for that comment, Julia. Good to know you're a soup fan.

Kimberlee, I'm glad you like the Kate Shackleton mysteries. The second, third and fourth will be appearing in the US, one each year.

Thanks, Kimberlee. Visited your excellent blog today but was defeated when I tried to leave a message. Will try again!

Hmm..not exactly sure why. I got your messages and posted them on the blog. I have comment approval maybe that's why?..I am not sure. But thanks for stopping by, I feel honored to have one of my favorite authors checking out my blog.

I enjoyed your interview, Frances, as I enjoy your Kate Shackleton stories. I grew up in Lancashire, but near the border with Yorkshire, so enjoy both counties. And I met my husband there. I must go and hunt out the fourth Kate Shackleton story. I'm collecting my Christmas reading selection at the moment.

Much appreciated, Anna, especially from so talented and busy a writer as you !

Great advice. I look forward to reading your books, they sound wonderful.