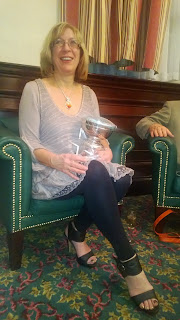 2013 was always going to be an exciting year – I have a "significant" birthday coming up in May and in March we celebrated our ruby wedding. As if that was not enough, just as I was getting back to work after the Christmas holidays, I had an email from the Awards Organiser to say my Sarah Mallory novel, BENEATH THE MAJOR'S SCARS, had been short-listed for the Rona Rose!

Having won the award last year, I knew how exciting the ceremony can be and I was thrilled to be on the shortlist again, especially when I saw the other contenders – all Mills & Boon authors and all excellent books

The day started with a sumptuous lunch at Le Meriden for all the RoNA Rose short-listed authors, courtesy of Mills & Boon. Even the bitingly cold wind couldn't dampen our spirits as we walked from the hotel to the RAF Club for the Awards Reception. We wished each other well, then went into the sumptuous ballroom to meet up with friends, well-wishers and the hopeful authors from the other RoNA categories. It was such a special occasion – the room looked fabulous with balloons and displays of the shortlisted books, waiters circulated, filling and re-filling our glasses and the noise levels rose steadily as the excitement mounted. I was very nervous beforehand, even though I really didn't think I would win again. Luckily we didn't have long to wait because the RoNA Rose was the first award to be presented.

The winners of each of the RoNA categories is given a beautiful glass star to keep but the RoNA Rose winner also has a beautiful silver rose bowl to hold for the year. When the Romance Prize was initiated, Harlequin Mills & Boon presented the RNA with this bowl in memory of Betty Neels, an RNA member and one of the readership's favourite authors, so you can imagine how special this is to me. When the winner was announced my knees just went weak! I felt like a real celebrity as I made my way through the crowd to collect my trophy and my glass star from Judy Finnigan and Richard Madeley, especially when photographers jumped out before me and the cameras started flashing! 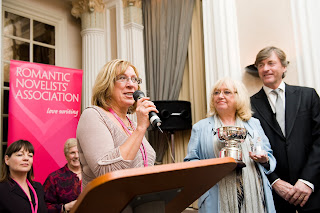 Judy very kindly held my star and my trophy for me while I made my speech. I can hardly recall what I said at the time, but it was filmed and is now on You Tube, so I know I was there (and thankfully I kept it very short!).

Here's the link, just in case you want to see how nervous I was!
http://www.youtube.com/watch?v=DFRiukyq_RI

The winning book, Beneath the Major's Scars is one of a pair of novels I wrote using twins for the main characters. Having twin boys myself I have always wanted to use twins as heroes (of course my characters are both gorgeous and extremely handsome, but that's as far as the similarities go with my own lads!)

I wanted to show that twins might look identical but they can have very different personalities, so I worked hard to make the two books very different – Dominic in Beneath the Major's Scars is the younger brother and as was common in the eighteenth and early nineteenth century he was a soldier, fighting in the Peninsula until he was horrifically injured and sent home to England, where he locked himself away in a lonely house on Exmoor, shunning society. 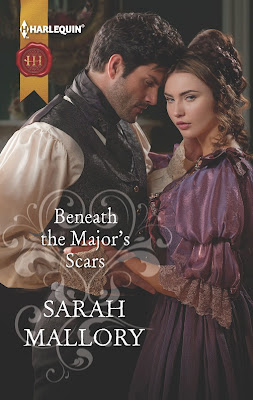 His twin, Jasper, is very different, his good looks have not been disfigured and he loves society. Of course it helps that as the rich Viscount Markham he is a very eligible bachelor. So where Dominic needs a woman to prove to him that life really is still worth living, in Behind the Rake's Wicked Wager, Jasper definitely needs to be brought down a peg or two!

After the awards, we had a celebratory dinner with the lovely Carole Townend and her husband, then I floated back to the hotel on air – I don't think I was too inebriated, as I was booked to record an interview for the RNIB the following morning: they had contacted me some months earlier to say that Beneath the Major's Scars had been selected for their talking books series, which is another wonderful accolade for this novel.

So what is next? Well, I am finishing my latest Sarah Mallory novel for Mills & Boon and the ideas are constantly bubbling up for more historical romances. However, I am also re-visiting a longer historical novel that I started some years ago. Who knows, this might be the year I get it re-written and out in the market! Whatever happens, I am just so pleased to have won the RoNA Rose this year. I keep looking at the two stars and the rose bowl that I keep by my desk and it gives me added confidence to continue writing the books I love.

Thank you Linda, we wish you every success for the future, and many congratulations!
Posted by Freda Lightfoot at 8:30 AM