Can a house heal a broken heart?


When artist Maddie inherits a house in Cornwall shortly after the death of her husband, she hopes it will be the fresh start she and her step-daughter desperately need. Trevenen is beautiful but neglected, and as Maddie discovers the stories of generations of women who've lived there before, she begins to feel her life is somehow intertwined within its walls.


But Maddie's dream of a calm life in the countryside is far from the reality she faces - and as she pulls at the seams of Trevenen's past, the house reveals secrets that have lain hidden for generations.

A bittersweet story about love and motherhood: Claire, who desperately wants a baby, and Romily, the woman who's carrying it for her...who is secretly in love with Claire's husband.

The reissue of two Regency romances featuring thoroughly unconventional heroines. No Place for a Lady: Bree owns a stagecoach company and teeters on the edge of respectability until she meets the rakish Earl of Penrith. Not Quite a Lady: Lily France is a very rich heiress with a background in trade and absolutely no taste – except in men, that is.

Benita Brown I’LL BE SEEING YOU

Autumn Raine is a pop vocalist at the very top of her game. She's a style icon, the paparazzi's darling and everyone wants to be her friend. But when her safety is threatened, her whole life starts to unravel. Enter Nathan Regan, an ex-elite soldier who is assigned to protect her. He's a good man doing bad things but what drives him? Passion? Madness? Or grief? Demons from his past are threatening to consume him. Can he win the fight alone or will he have to admit he needs help?


As the threat deepens, Autumn starts to find out who she really needs in her life. Is there still room for personal assistant Janey or rapper boyfriend Rockweiler? When everyone around her is feeding her lies, how does she work out the truth? Does her record producer know more than he's letting on? What is her mother, the British Foreign Secretary's involvement in the situation? And can Autumn put her faith in a forty-something Jamaican woman who handles an automatic weapon as expertly as she cooks? Eluding kidnap and trying to stay alive, can Autumn find the strength to be the person she longs to be? And can two people, poles apart, forge something strong enough to survive anything?


Finding love can be a bumpy ride
When newly unemployed accountant Tim agrees to run his injured brother’s mountain bike shop, an unexpected attraction brings him close to the door of a closet he’s tried to deny he’s in. For Tim, loving Matt means coming to terms with who he is—and being willing to fight for the man he loves.


Limericks, lies, and puppy-dog eyes…Amateur poet Jude Biggerstaff tries to build a relationship with David, aka Karate Crumpet, sabotaged by a comedy of errors caused by his mum's little white lies.

When Bessie Rushbrook takes in an evacuee in July 1944, it starts a chain of events which threatens to tear her family apart.

Nightstar, Book 3
Heart-stoppingly sexy Donovan Harvey, bassist for Murder City Ravens, is
also a writer. At his first fantasy convention, he wants to launch his new
book, not find the love of his life. He gets both.
Allie, unabashed fan and book editor, can't believe she's locking lips with
the bassist for the hottest band, but sometime during their first searingly
hot encounter, she discovers Donovan the man, not the rock musician and
she's even more smitten.
They can't get enough of each other. In the shower, against the wall, even
in bed, Donovan talks during sex, leading Allie through fantasies she'd
never imagined before, presenting her with scenarios she can't resist,
setting her alight with steamy stories he'll never share with anyone else.
She inspires him. He gives her ideas.
But Murder City Ravens is on a world tour, and Allie needs to stay in New
York if she's to make a success of her career. When her company asks her to
poach Donovan from his current publisher, Allie hesitates, but her boss
makes it impossible for her to refuse without losing her job.
A RomanticaR contemporary erotic romance from Ellora's Cave
Website:

Gracie McCabe is trying to build a new life for herself and has her future mapped out but then the doubts surface and old secrets threaten to ruin everything. Will she ever be able to put the past to rest?
GRACIE is a regional saga set in Essex and the second in a series.

Susan Palmquist  THE ONE AND ONLY


Muse It Up Publishing


Brandon Jones is an only child and that’s his problem. When he can’t convince his parents that a new baby is just what the family needs he resorts to taking the next door neighbour’s newest arrival. Every bad decision has its consequences and finally he realises that he's destined to be Brandon Jones AKA, The One And Only.


Lucy Davis has always loved Bryce Davis but never had the courage to tell him. She’s signed with the Perfect Pairing matchmaking service, hoping that Sadie Sutton can help them become a couple. However, what Lucy doesn’t know is that Bryce got married after a whirlwind romance. Sadie won’t give up on finding Lucy the perfect man.


Brad Ryan finds a baby in a carrier sitting on the front step of his sheriff’s office. If that wasn’t a big enough surprise, there’s a note tucked inside the blanket telling him he’s the father.


What’s a sheriff to do when he’s suddenly thrown into the role of single father? Sadie has the answer and it’s in the shape of a nanny named Lucy. Will these two fall in love and will Sadie have another perfect pairing to gloat about?

Jane Jackson EYE OF THE WIND

Set in 1795, a year since Lord Roland Stratton left Cornwall for France to undertake a secret mission for the British government.


When her father is felled by a stroke brought on by desperate financial problems, Melissa Tregonning has to try to keep the family boatyard running and pay off his debts. Determined to protect his reputation, she must keep his plight and her efforts a secret, even from her family.


She is helped by a mysterious stranger discovered living in woods on her father's land. But who is he? Why does he seek solitude? And what – or who – caused his terrible wounds?


Attraction neither dare acknowledge deepens into love. But dark secrets threaten to part them forever, until Melissa's courage leads to a revelation that changes everything.


Book 2 in the BODY ELECTRIC series. Sometimes a girl has to accept that the man—er, robot—you think you want is only seventy-six percent of the man you need.
http://www.electrashepherd.com


Thanks to an embarrassing incident involving a wedding and her ex-boyfriend Marcus, Lucy has to leave her home town in a hurry and needs a place to escape to for a while.
Best friend Fiona is convinced now would be a good time for Lucy to get herself a new life with some potential for romance thrown in. Fate seems to agree when Lucy is given the once-in-a-lifetime chance to star in a TV show and be a contestant on The Love Programme - two weeks of luxury living on a grand Highland estate coupled with, she hopes, fun and romance in wildest Scotland.


When Lucy meets Paul - the young, handsome owner of the Highland estate - she thinks she may have found the love of her life but who is the mysterious Hannah and what part does she play in his life? When she discovers that Marcus is planning to follow her to Scotland to win her back Lucy has some serious soul searching to do. Does she have a future with Paul, with Marcus or is she yet to find the man of her dreams?


Zanna Mackenzie   HOW DO YOU SPELL LOVE?


Kat can’t help wishing there was more to life than this. What happened to her dream job? What happened with Nathan? Summer is wondering where her life is going too… battling the developers of a controversial housing estate and working out why boyfriend Rob is increasingly distant.


When the developers win the battle and move into town everyone’s life is turned upside down. Kat meets building site project manager Alex. She enjoys his company far too much, even though he’s on the town’s most hated list. Summer meets Tom who has plenty of relationship troubles of his own, so things could get really complicated.


Soon everyone is keeping secrets, lives change and hearts are broken. Is everything falling apart, or does life just work in mysterious ways…

1905. Rosie Belsfield feels as if her life has ended when she is rejected from Ellis Island and put on the next boat back to England, leaving her family behind. But fate gives her a second chance when she befriends Lady Rosalind. Having boarded the ship with one identity, fate decrees that Rosie leave it with another . . .

As Rosie arrives in Cornwall as ‘Rosalind’, she finds herself increasingly trapped by her deception and the cruelty of those around her. Her only hope seems to be the enigmatic Bryce Tregowan, with whom the promise of a new life beckons. As she falls deeper into love and lies, can Rosie keep up the act, or will her secrets reveal themselves? And to what consequences? 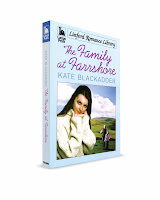 Posted by theromaniacs at 7:23 AM

Some fantastic releases for April!

I agree! But of course I'm prejudice....

Can I mention mine, too? The Nightingale Sisters is out on 25th April, published by Arrow. You can find out more and read an extract on my website - www.donnadouglas.co.uk
Thank you!