Margaret Kaine: From Sagas to E-books

We are delighted to welcome Margaret Kaine as our guest today.

You won the Romantic Novelists’ Association New Writer Award in 2002 and the Society of Author’s Sagittarius Award in 2003 with ‘Ring of Clay’. How did this affect your writing life?
There is no doubt that it affected my writing career. When I won the New Writer’s Award, then sponsored by the Readers’ Digest ‘Of Love and Life’ series, I managed to make a coherent acceptance speech - let no-one be misled, it’s a hugely emotional moment - and made my way through the crowd to be greeted by Carolyn Caughey, the then senior editor at Hodder & Stoughton. She asked me if the UK rights were available (Ring of Clay was first published in Ireland by Poolbeg). And as a result Hodder bought the UK rights to my first four novels. I remember her delight when the following year, Ring of Clay went on to win the Society of Authors’ Sagittarius Prize of £4,000. Would my writing career have taken off as it did if I hadn’t won the above awards? Who can say?

And for me at the time, luck was with me all the way. For instance, the Sagittarius Prize is awarded to the ‘the best first novel by an author aged over 60’, and for the first time it was sponsored by the wonderful Terry Pratchett, that fact alone bringing extra publicity. And on a purely personal but important point, the uncertain self-confidence that I think we all feel on occasions about our writing, received an enormous boost. That doesn’t mean that I don’t doubt my ability at times, but I have a framed letter from the SoA above my desk, think of how good the RNA Rose Bowl used to look on my hall table, and feel a surge of encouragement.
Would you advise writers to enter competitions?
I think some writers find these invaluable, especially at the beginning of their career. A competition, judged by a writer or writers you respect, can provide a useful challenge, an inspiration to perhaps attempt a different genre. Or even the incentive you need to write at all. And the word count required is often quite short, giving a budding novelist a breather from a long manuscript. But I do believe that if your ambition is to write a novel, then it is best not to allow yourself to become distracted by other writing ventures. Having said that, I know there are several writers in the RNA who combine both with enormous success, so it’s a question of finding out what suits you best.
What is it about writing sagas that you enjoy so much?
For me, it’s the nostalgia. I began to write Ring of Clay just after my mother died, and writing about my childhood in the Potteries and basing the character of Rose on her, proved to be the therapy I needed to get through that first year. It astonished me how many details of the industrial life there I could remember. How many facets of the people and area had seeped into my unconscious. Those years were good times.

Is there another genre that appeals to you enough to ‘have a go’? Would you ever write another genre?
I feel that I have already moved into a different genre with Dangerous Decisions, as it is definitely not a saga, and set in the Edwardian era, whereas my first seven novels were set in the 1950’s, 60’s and 70’s. Maybe a time-slip might appeal, but I am proud of being a romantic novelist, that will never change.

What sort of impact have e-books had on your back catalogue and your readership? Has it changed the way your work?
I’ve embraced the concept of e-books, and love both my Kindle and print books. As for my backlist, it’s lovely to see that some of my out of print Potteries sagas are now enjoying a new lease of life and attracting new readers. I don’t think the digital side of publishing has affected the way I write at all. 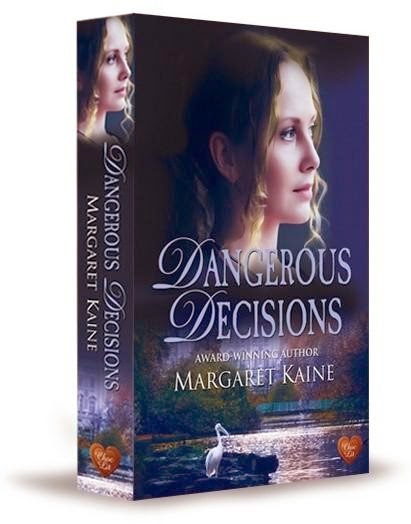 Tell us about Margaret Kaine and Choc Lit.


Ah, the lovely Choc Lit, who are the publishers of Dangerous Decisions, my romantic suspense novel set in the Edwardian era. Berni Stevens, who designs many of their covers, has given me my favourite cover of all time. If one can be in love with the cover of your book, then I’m afraid I must plead guilty. And it’s a good feeling to be ‘part of a publishing family’.

I notice you are running a competition on your website. Is this a first and how do you hope it will impact on your readership?
Now this is a tricky subject for me at the moment. I’ve run a competition on my website for many years, and it’s promoted by leading competition forums. This means that hundreds enter my competitions, and the hope is that this leads to new readers. But I confess to feeling a little disillusioned, as it is rare that a winner gives feedback on a book. Meanwhile postage is increasing all the time . . .

As an established author, what advice would you give to new writers?
To write what you enjoy and to join a good writers’ workshop. I still attend mine and read out my chapters and value highly the constructive critiques and loyal friendship. The best tip on writing I can give is to read your work aloud, edit it, put it aside for three weeks then read it aloud again before another edit. This will give it a final polish.

What is next for Margaret Kaine, the author?
I have almost finished another Edwardian novel, set initially in a workhouse, but again with the well-loved ‘Upstairs Downstairs’, scenario. I so love the elegance of this era, although as my grandmother was sent to be a scullery maid at the age of 13, I suspect that my own place in the hierarchy would have been strictly ‘downstairs’. Sigh!

Margaret Kaine began by writing short stories which were published in the UK, Australia, Norway, South Africa and Ireland. Her debut novel, Ring of Clay, won two literary awards. Seven of her romantic sagas about life in the Potteries have been mainstream published, translations including German and French, and all are available in LP, Audio and Digital. Dangerous Decisions, her most recent novel, published by Choc Lit, is a romantic and psychological suspense set in the Edwardian era.

Thank you so much for joining us today, Margaret.


Thank you, Elaine and Natalie for inviting me on to the RNA Blog, it is much appreciated.

I very much enjoyed reading this, Margaret. It was an interesting blog. Thank you.

Very enjoyable interview, Margaret. I found it very interesting to read. Thanks and hope to see you soon.


Thank you, Karen. I'm hoping to go to the next meeting of the Belmont Belles - the RNA Leicester Chapter - so maybe I'll see you there.

It was lovely 'working' with you, Margaret


It was a pleasure to get to know you better, Natalie. x

I really enjoyed reading this interview – so much interesting information and insight. Thank you!


That's a lovely thing to say, Clare. Thank you!

It's a pleasure to read this lovely blog interview with Margaret Kaine. Always something interesting and new to learn.

I love this picture of Margaret.


Thank you Cathy. I hope to see you soon at the workshop again. xx

Lovely interview Margaret. Wonderful photograph. How come you are looking younger? At you a female Benjamin Button?


What a sweetheart you are, Jenni. I'll remind myself of your comment first thing in the morning!


Thank you, Angela for taking the time to comment, I know how difficult things are for you at the moment. Am hoping to see you this year at the RNA Conference.

Lovely to read Margaret's full story.
I've really enjoyed her books, and she's always such a great supporter of other authors.


And they always deserve my support, I always admire and have great respect for good writers. Books are an essential part of my life June, I couldn't imagine being without them. I'm certainly looking forward to your next!

Thank you for finding time to appear on the blog, Margaret and good luck with your next book.

Thank you for finding time to appear on the blog, Margaret and good luck with your next book.


Thank you Elaine. I'm coming to the end of writing it - my next task will be to find a stunning title!

Margaret, you are the writer I want to be when I grow up. Fantastic blog post, well done. You have always been a great supporter of new writers in the Leicester Chapter and we have learned much from you. Your career has been long and varied and you have adapted to meet the changes in publishing head on. I love you novels and look fwd to reading the next one.


Bless you Lizzie, and I'm sure all of we writers in Leicester appreciate your drive and initiative in setting up the RNA Leicester chapter. It has brought a new perspective and given us the chance to enjoy lots of writerly chat over delicious lunches not to mention wine! I always enjoy the humour in your novels and return the compliment that I'm looking forward to reading your new one.