Earlier this month Elaine Roberts wrote about her expectations of The London Book Fair and how she was planning her trip. So, how did she get on?

As a London Book Fair (LBF) virgin I found it to be a fascinating place. The only thing I can give you for comparison is the Ideal Home Exhibition but bigger, much bigger. It is my understanding that this is the first time the event has been held at Olympia, in previous years it was Earls Court.

Before the day I was advised to do some preparation work. Where did I want to go and whom did I
want to see. That was very sound advice and something I would tell others to do. However, I did try this but the LBF website contained so much information, some quite difficult to find, so I gave up on that idea. I went along with friends, some experienced and some not so and was lucky with fabulous weather and a straightforward journey from Kent.

Once we were scanned in we picked up a leaflet that was the floor plans/maps for the event and it told us which companies were attending and where they were situated. The first stop was a cup of tea/coffee and a study of the maps. We clearly needed a plan to work to, which we did try and formulate but for me it was all a little overwhelming. So, unlike me, I decided to become a sheep and be guided by the others in my
group. A lot of time was spent trying to work out where we were in conjunction to where we wanted to be and it was comforting to know we weren’t alone in that. People were standing around staring down at maps, pointing and looking very confused.

At lunchtime we made our way to the Pizza Express, although there were many eating-places to choose from. Over lunch we began talking about the strategy for the afternoon. However, it needs to be said that if you get four writers round the table they are going to spend more time talking about their writing, and we did.

What the event did was emphasise how big the world of publishing is and, yes subconsciously I did know that but to see it under one roof was quite spectacular. There were many talks to choose from. We sat in on “How To Promote Yourself”, which covered social media and events. It was a good talk but it didn’t tell me anything I didn’t already know through attending the London Chapter, The Write Place and the RNA Conference.

My impression of the event is that it is a trade fair where a lot of behind the scenes business is done. All aspects of publishing appeared to be represented from self-publishing, small independent publishers to the large publishing houses as well as all genres, both fiction and non-fiction. There were also plenty of places to eat and sit for five minutes. 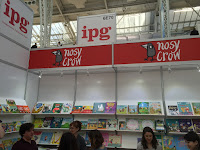 As an RNA New Writers’ Scheme member I have attended several conferences and chapter meetings where I have learnt some valuable lessons and listening to the talks at the LBF reinforced how much I already know. Would I recommend attending? Yes I would, even if you are only going for the realisation that as a writer you are joining, or attempting to join, a fascinating and hugely complex world. 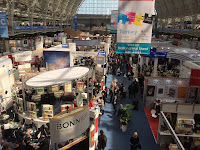 Francesca Capaldi Burgess, who had previously attended the London Book Fair, makes comparisons between the two venues.
·      From a practical point of view, I found that Olympia is more open and airy than Earl's Court was. It also has more cafes with seating to take a break in.

·      Earl's Court was easier to get to via its underground station, although Olympia (with a station that is often closed) is an easy ten minute walk from West Kensington tube station or a bus ride from Earl's Court.

·      The directory of exhibitors used to be included in the ticket price at Earl's Court but now costs £10 extra, though I imagine that's the doing of the Book Fair organiser, not the venue.

Thank you, Elaine, for telling us about your interesting day.

If you would like to write about a writing event or your own writing life please contact the blog: elaineeverest@aol.com

Interesting to hear how you got on and thanks for sharing.