Welcome to Lynne Shelby, another of the talented contenders for this year's Joan Hessayon Award and graduate of the RNA New Writers' Scheme. Thank you for answering our questions, Lynne. 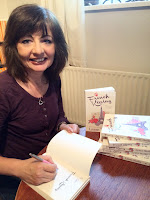 How long have you been writing? Is this your first published piece?
I can’t remember a time when I wasn’t writing fiction. As a child, I wrote short stories, and as a teenager, I began to write longer pieces. I first submitted a manuscript, an adventure story, to a publisher when I was fourteen – they didn’t publish it, but an editor sent me a very kind letter advising me to keep on with my writing, as they thought I had talent. I continued writing in various genres over the years, but my stories always had a romance between the hero and heroine. About six years ago, I realized that what I really wanted to write was romantic fiction. ‘French Kissing,’ which is a contemporary romance, is my first published piece. I’m so glad I followed that editor’s long ago advice.

What came first, agent or publisher?
It was the publisher. ‘French Kissing’ is published by Accent Press. I don’t have an agent.

How did you find your publisher?
Not long after ‘French Kissing’ had been through the NWS, I spotted that Accent Press and Woman magazine were running a writing competition for unpublished authors of women’s contemporary fiction, with a prize of a publishing contract with Accent Press. My reader’s report had been very encouraging, so I sent off ‘French Kissing’ as my entry – and told myself not to think about it. A few months later, I received a call from Accent Press to tell me that I’d won the competition – and my novel was going to be published. I’ll never forget that amazing moment.

When was your book published?
‘French Kissing’ was published on 20th August 2015. To celebrate, I went with a group of family and friends to Paris, where the book is partly set. At midnight, as the 19th became the 20th of August, we were standing in one of the locations from the book, in sight of the Eiffel Tower, which was wonderful.

Tell us something about your book
Anna, and her French penfriend, Alexandre, have been exchanging letters for fifteen years, but met only once as children. When Paris-based Alex, now a photographer, comes to work in London, Anna fails to recognise him. The geeky boy she remembers has become an extremely attractive man. Anna’s female friends are soon swooning over Alex’s Gallic charm, and .Anna’s boyfriend Nick is increasingly jealous of their friendship. Then Alex has to return to Paris to oversee the hanging of his photographs in an exhibition, and invites Anna to accompany him so that he can show her the city he adores …

What piece of advice would you give current members of the NWS?
Keep writing – every day if you can – and never give up your dream.

Thank you, Lynne, we hope you have a fabulous evening at the RNA Summer Party and good luck with your writing career.

Thank you for inviting me to the blog. I'm very much looking forward to meeting everyone :)

Great to see you on the blog and amongst the nominees (despite being a competitor!). Wishing you luck and look forward to seeing you on the night. Best wishes, Richard