Join Kate Thompson as she journeys back in time to meet with the mesmerising brides who said ‘I do’ to a lifetime of commitment.

With her 22-inch waist and perfect poise the bride could have stepped straight out of a 1930s motion
picture. And yet, this portrait wasn’t taken in Hollywood, but impoverished post-war Whitechapel in

Half-an-hour after posing for this photograph, the bride was back at her mother in law’s terrace in Bethnal Green, East London, clambering over a Salvation Army trestle table for a wedding breakfast of mashed potato, cold roast beef and beetroot, followed by Thursday to Monday in Canvey Island.

‘All top show, nothing underneath as my Mum would say,’ laughs the bride, Pat Spicer, now a twinkly-eyed 87-year-old grandmother living a comfortable life in Berkshire. Pat was working as an apprentice dressmaker, when she met and married the man of her dreams, gent’s barber, Bill Spicer.
‘There was so much poverty in those days, we all craved glamour,’ she says, ‘our chance to feel like a star for the day.'

Pat’s heartwarming story shows the dichotomy between hardship and high glamour that was so prevalent during the grinding poverty of the thirties and forties. In researching my book, The Wedding Girls, I stumbled upon a lost world of innocence and hope. A time when divorce was never a seriously considered option, girls’ married for life and weddings were about love, community and family, not sugared almonds and selfies.

Glamorous weddings were a reaction to the horrors of the Great War and that, combined with the emergence of Hollywood, meant brides were determined to sprinkle a dusting of romance and escapism over the most important day of their lives.

Nowadays, every wedding guest can be seen snapping selfies with the bride, but back then, formal studio portraiture was de rigueur across all classes. To own a beautiful wedding portrait – in a time when few people owned a camera, much less a selfie-stick, was a badge of honour. During the Depression and the deprivation of post-war Britain, a beautiful wedding portrait was a symbol of hope.

In researching my novel I travelled my way around the East End to meet with many women, 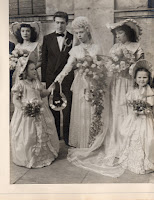 now in their nineties, whose memories and health might be fragile, but who still recall with vivid intensity the most treasured day of their lives.
‘Brian was just back from serving with the 7th Armoured Division, one of Montgomery’s brave ‘desert rats’ when I met him at a dance,’ recalls 90-year-old Renee Stack from East London, who was working as a 17-year-old shop girl in Petticoat Lane at the time. ‘He walked over to me and said, “I’m going to marry you”.’

Renee’s strict Jewish mother was less impressed. “Wait and see what he makes of himself first,” was her sage advice. Brian knuckled down to civilian life and spent three years learning Hebrew so he could convert to Judaism in order to marry Renee. At her wedding ceremony in 1948, Renee was so lusciously beautiful she could easily have passed for Rita Hayworth and her handsome bridegroom, Clark Gable.

‘We had no money so Brian borrowed a suit and my friend Edie, who worked as a sample machinist, made me my beautiful pale blue silk crepe wedding dress as a gift. That’s the way people were back then, helping each other out. I did my own hair and make up and the whole family chipped in to pay for the wedding portrait. We married on a shoestring, but I was the happiest girl alive.’

I spent the most absorbing week in Tower Hamlets Local History Library & Archives looking through the wedding announcements in back copies of the East London Advertiser from 1936. 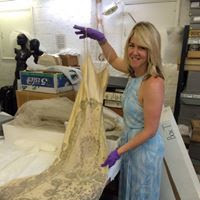 Buried amongst news articles on outbreaks of Tuberculosis and fascist demonstrations were more romantic offerings. Page-after-page of captivating young brides smiled back at me. I was so touched by the immense care each married couple took to look their absolute best and the hope, resilience and pride shining out from their faces. In 1936, the Second World War loomed darkly on the horizon. How many of these dashing bridegrooms I wondered, went on to fight and indeed survive that war? The knowledge of what fate awaited these newly weds, leant a deep poignancy to their spellbinding wedding portraits.

We can never hope to recreate these images, or the chaste innocence that shines out from them, but perhaps we can lose ourselves in them, if only for a little while.

Kate Thompson is the author of The Wedding Girls, published by Pan Macmillan out March 9th.

Kate will be discussing vintage weddings between the wars on a panel with curators, designers and photographers at the Museum of London on March 31st 6pm.
More details here