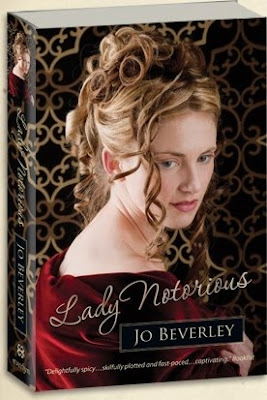 Not to Italy, alas, but to someone who's lived for thirty plus years in Canada, Shafesbury, Winchester, and even Cardiff will be delightful.

I probably should explain the "even" there, shouldn't I? I think I'm going to enjoy Cardiff, but I don't think it has the same long history as the other two.
Please correct me if I'm wrong!

So why am I on this Grand Tour? Because I'm going to be following the journey my characters take in Lady Notorious as part of a promo tour to celebrate the beginning of a new line of romantic historicals from Everlyn Books http://www.everlyn.net/ (who happen to be based near Cardiff, so the Welsh connection is explained.) Isn't that the best idea? It was my publisher's. I can take no credit.

Lady Notorious was first published in the US by Penguin-NAL, and it won the RITA award from Romance Writers of America. It has also appeared on a number of lists of best historical romances, including one for the best historical romances of the 20th century .
Lady Notorious starts out near Shaftesbury when Lady Chastity Ware, dressed as a man of course, holds up a coach. Unlike most highwaypersons, she's not after "your money or your life" but "your coach or your life," because she has a widowed sister and a very young baby to transport to safety in Maidenhead. Not far on today's roads, but a long way in the mid-eighteenth century.

However, the coach's occupant is not a middle-aged merchant or an elderly lady as she'd hoped, but Lord Cynric Malloren, war hero and aristocrat, and he sees not criminal, but an amusing escape from boredom. He's recovering from a fever that almost killed him and tired of being cosseted, so he gets rid of his servants and against her objections joins Chastity in her mission. When it turns out that they have the army and one of the most powerful men in England on their tail, in Cyn's opinion, that only makes things more interesting. It also explains why their route took some turns.

Lady Notorious was originally published by NAL Penguin in New York, but this is

the first UK edition -- in fact, my first UK edition - and is launching Everlyn's new line of fast-paced, dramatic, passionate and sexy historical novels. The fact that I have just moved back to the UK to live in pure, but delightful, coincidence.

There are readings and/or informal chats in Shaftesbury, Salisbury, Winchester,

Southhampton, Maidenhead, Farnham and Cardiff. In Salisbury, there will be a special evening reading. It's free but spaces are limited, so it's important that you contact Everlyn Books blackhorsereading@everlyn.net to book a place.
For all the other occasions, just turn up. I'll be delighted to chat about reading and writing the romantic historical.

The full schedule is here.
http://www.jobev.com/appear.html

For more information about Lady Notorious, and to read an extract, go to http://www.jobev.com/ and click on the cover.
Posted by Unknown at 5:22 AM

"I think I'm going to enjoy Cardiff, but I don't think it has the same long history as the other two.
Please correct me if I'm wrong!"

According to the tourist information website for Cardiff, "The first people to take advantage of this location were the Romans who set up a fort here on the site of Cardiff Castle about AD55-60. Some of the original Roman walls can still be seen" and "Today, much of Cardiff's Roman remains are lost beneath the medieval castle. The castle dates from the 11th century, when the Normans conquered Glamorgan. It was begun by William the Conqueror on his return from St David's in Pembrokeshire, in 1081."

Thanks, Laura. I knew someone would know, and sometimes it's more fun not to look something up.

Will you have enough free time on the tour to go and see the sights, Jo? And if you do, will you be putting photos up at the Word Wenches? If you did it would be a kind of consolation prize for those of us who can't meet you at any point during the tour.....

Visiting and photographing will be part of the fun, yes. Today we're in Shaftesbury and we're going to look the Crown here, though unfortunately it's shut and looking for new management.

There'll be photos on WW, yes, but I have a photo blog http://photosjo.shutterfly.com/

the most recent there now are of Whitby and the Whitby Goth Weekend.

Interesting post... I can see that you put a lot of hard work on your blog. I'm sure I'd visit here more often. George from romantic films.