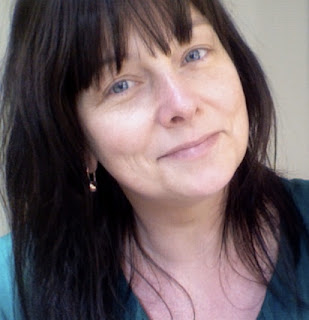 Today I welcome debut author Serena Clarke to the Blog. Serena grew up in a family of itchy-footed readers and dreamers – not concentrating, reading the atlas and Narnia books, and planning to escape somewhere magical as soon as she could. When she was 16, she went from New Zealand to live in Sweden for a year. It was the beginning of many travels and adventures – and quite a few disasters! She didn’t know it at the time, but eventually she’d be grateful for all the downs as well as the ups. As writers say in the face of adversity: “I can use that.” She’s now back in New Zealand where she writes stories reflecting her determined belief in magic, possibility, second chances and happy endings. As an NWS member who has recently graduated, tell us about your first book and the excitement of getting that much-longed for acceptance.

The starting point for ALL OVER THE PLACE came from one small encounter, late at night on the Underground. I think the tube provides very rich pickings for ideas! I was fascinated to discover how a story can roll itself out before you – and dismayed at how hard you sometimes have to wrestle with it! Once the first draft was finished, it went off to my reader at the New Writers’ Scheme. I did a lot of rewriting based on her insightful comments and advice. Then I started sending it to London agents. In the meantime, someone suggested trying digital publishers in the USA, which I did – and it was accepted quite quickly by Crimson Romance. This ‘brave new world’ of e-publishing is daunting at times, but so exciting to be part of.

What was the hardest challenge for you in getting published?

Keeping on keeping on, when I had no idea if I could even finish a book, and if I did, whether it would be any good! Juggling children, paid work, and life in general, it took a long time, and there were days when I had serious doubts. But in the middle of it all I read a poem by the American writer Marge Piercy, that begins:

Talent is what they say
you have after the novel
is published and favorably
reviewed. Beforehand, what
you have is a tedious
delusion…

And I thought, well, I might be deluded, but I’ll never know unless I follow it through. So I kept on.

How did you hear about the RNA and do you think the New Writer’s Scheme helped you get published?

I heard about the RNA by following one of those endless dances the internet leads you on, from website to website – and I’m very glad I did! Without doubt, the suggestions from my NWS reader made all the difference in shaping All Over the Place, giving it more depth and heart. And she gave me the courage to think that maybe I would get there one day, which is priceless. It’s also been an incredible way to learn about writing and the publishing world in general, and meet some wonderful people. I’m grateful to everyone in the RNA for the generous way they share information and advice.

Can you work anywhere or do you have a favourite place to hide away and write? 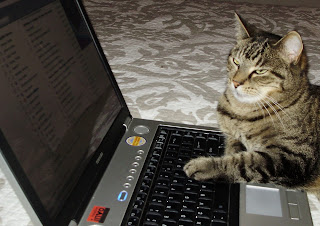 When I’m on a roll, I can work anywhere. But mostly I write on my bed, or on the sofa, with my little MacBook slowly scorching my knees. I often have help from my writing assistant, Miss Purdy. She also understands the importance of keeping up with correspondence. (We've upgraded since this picture was taken – she's a Mac girl too.)

While I was writing ALL OVER THE PLACE, I read lots of books and blog posts and interviews about the craft of writing. I soaked up as much as I could! And one thing that stuck with me was this famous excerpt from an interview with Earnest Hemingway, in The Paris Review:

Interviewer: How much rewriting do you do?
Hemingway: It depends. I re-wrote the ending to Farewell to Arms, the last page of it, thirty-nine times before I was satisfied.
Interviewer: Was there some technical problem there? What was it that had stumped you? Hemingway: Getting the words right.

I’m no Hemingway, and I doubt I’ll ever appear in The Paris Review! But that seemed to get right to the guts of it. There are all kinds of technical things to consider, of course, but in the end you just have to write and rewrite until you get it right. On the tough days, just do what you can, until you get to an easier day and it all flows again. And when you think you’re finished, give it to someone else for their opinion – then rewrite again. Rinse and repeat until someone tears it from your death-like grasp!

Tell us something of the genre in which you write. What is its special appeal for you?

When I started writing, I didn’t think about genre – I just launched in. It was interesting to discover what kind of writer I actually was! Unsurprisingly, what I eventually ended up with was the same kind of book I like to read: light in tone but with plenty to think about, contemporary and a little bit wry, with a sense of magic and possibility. And definitely a happy ending.

Um, yes. Over-involved might be a better word! But as a new author it’s been a great way to learn, and I’ve got to know so many amazing people. One of the best things, for me, has been joining the Facebook group of authors with the same publisher. Support, advice and encouragement from writers going through the same things – and those above you on the ladder – is invaluable. And sanity-saving at times!

Sorry, could you repeat the question? Other interests? I seem to spend all my waking hours writing or doing writing-related things – or thinking about it – but it doesn’t feel like work at all. Sometimes I feel guilty for taking something I love so much and calling it ‘work’. Travel. I’ve ticked off 18 countries, but there are lots more on the list. Call it research! Driving in my much-loved Chevy Blazer. Now I understand how some men get about their cars – I still roll down the window when I drive up the levels in a parking building, just to hear the engine! Reading, of course. Watching movies. Hanging out with my boys – the lovely one I married, and our little ones. Cups of tea with my best girlfriends. Simple things.

Who is your favourite hero?

Oh, that’s too hard! You need to do it by category, like the Oscars. Best literary hero: Captain Jack Elliot from These is My Words. Best superhero hero: Robert Downey Jr in Iron Man. Best outer space hero: Captain Jean-Luc Picard of the Starship Enterprise. Best hero in a romantic comedy: Ryan Reynolds in The Proposal. Best hero genetically altered in a military experiment: Jay Ryan in Beauty and the Beast. I could go on…

Like lots of people, I’m afraid to say too much about a work in progress – there’s a danger that the magic will dissipate if you say things aloud. But…twin sisters who leave London to join a flash mob movement in California. Matchmaking, bees, Iggy Pop, loss and acceptance, secrets and sandcastles. A hostage drama, people power in a hyper-connected world, true love, and the trials and joys of sisterhood. I’ve said too much already! 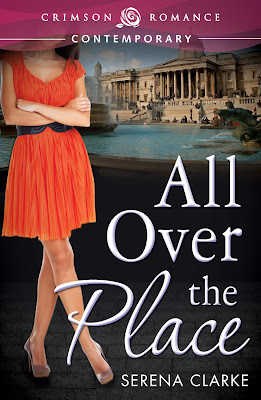 Livi Callaway has fled back to London after a reality TV disaster in New Zealand. Safely anonymous in the big city, she’s determined to stay under the radar from now on. But her attempts to build a new life are complicated by unexpected visitors from her old one, and new dangers and temptations lie in wait.

Late one night, she meets a mysteriously sexy American on the Underground – and the events that follow take her from Pooh Bear to the golden lights of Paris, via a trail of rock stars dead and alive. A family in disarray, a determined Swede, a crazed Australian and a childhood friend (who might yet be more than that) have her all over the place as she tries to discover the American’s secret – while keeping her own. With help – and occasional hindrance – from her friends, what she eventually finds is something unexpected...sometimes, running away can lead you to exactly what you didn’t know you needed.

Thank you for sparing time to talk to us today Serena. We wish you every success with your book. Best wishes, Freda

Thanks so much for having me on the blog today Freda - it's a thrill to be in such amazing company! :-)

Wonderful post, Serena, such a lovely interview. Glad to see you're already hard at work on the next one!

That's a great poem, Serena, and I've just ordered These Is My Words from the library!

I look forward to reading your novel!

Thanks ladies! Jo I'd love to hear what you think of These is My Words. (Hope you enjoy mine too!) :-)