I asked Clare a few questions about her writing life.

Welcome Clare. Can you tell us something about your life and how you came to be a writer?
Hi, thank you for having me on the blog! I have three school-aged children - my son is 14 and the 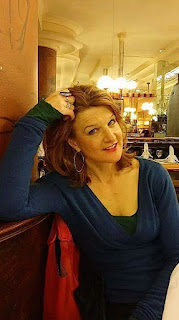 girls (twins) are 11. One of the girls has cerebral palsy – brain damage that affects her balance and muscle control – but we’re fortunate in that it’s quite mild, so she’s able to go to the same school as the other two. We live in Nottingham, but we also have a houseboat in Buckinghamshire, which is my husband’s crash pad – he works in North London four days a week. My father-in-law has just moved into the annexe in the back garden, and we also have a German Shepherd dog, so it’s busy at home, but luckily there’s time to work during school hours (and sometimes at night, if deadlines are pressing…).

I came quite late to writing. Of course I loved reading and creative writing at school, but being an author always seemed terribly glamorous and out-of-reach, something that other people do, a bit like being a film star or a polar explorer. Then, after I’d been post-university travelling in the 90s, I picked up a job as a nanny to the author Betsy Tobin. She became a bit of a role model, because she was a mum, and she wrote, and she was a REAL (and also very nice) person. So I suppose my contact with her planted the seed that I could perhaps become an author one day myself.
I began writing my first novel when I was on maternity leave with my son in 2002. In between starting writing and getting published (in 2015), I had three children, moved house five times (two different towns in the UK, two different towns in Germany and also Kathmandu in Nepal – my husband was in the army so we were constantly being relocated with his job) and wrote four full-length novels, as well as starting a handful of others. I also took an MA in creative writing. Learning the craft of writing was a very long apprenticeship for me!

Your wonderful novel won the RNA’s Joan Hessayon Award earlier this year.  What gave you the idea for the story?
The inspiration for The Gunner Girl was my mother-in-law, who served with the Auxiliary Territorial Service (ATS) in WW2. I never met her, because sadly she passed away before I got together with my husband. My father-in-law also served in the army, and one day my husband said, “Of course the joke was, growing up, that Mum had seen more enemy action than Dad.” When I asked what he meant, he said his mother had been on the anti-aircraft guns in London during the war, but his father, who was a couple of years younger, hadn’t joined up until after the hostilities were over. I had no idea that women were on active service in wartime, and I wanted to find out more. However, my husband said there was nobody from his mother’s side of the family to ask. He said there were no grandparents, aunties, uncles or cousins from his mother’s side – or at least, he’d never met any.
So, I had this fascination with the idea of women soldiers in WW2, combined with the mystery of how someone could ‘lose’ their background like that. I wondered why a teenage girl would begin an entirely new life when she joined the army? Had she lost her family or chosen to leave them behind? What part had the war played in her circumstances and her choices? Those questions catalysed the creation of the main character in The Gunner Girl, and the rest of the book grew organically from that starting point .

Will you always write historical novels or do you yearn to write another genre?
I wouldn’t say I yearn to write another genre, but I’m certainly open to it. The Gunner Girl was actually the first historical novel I’d written (the other three unpublished books are contemporary stories about women soldiers). Although The English Agent (out now in hardback) and my third – as yet untitled – book are also based in WW2, I certainly wouldn’t rule out returning to something contemporary, or perhaps a time-slip story. I also quite fancy doing something like historical crime – but there are so many excellent crime writers out there, that I’m not quite sure I’m brave enough to give it a go until I’m a little more experienced.

Do you enjoy the research for your novels?
I love the research. I trawl Amazon for obscure wartime memoirs and biographies, and YouTube for old Pathe news clips. The Imperial War Museum has some great online sound archives, and there are wonderful WW2 images to be found just a Google-click away. Hurrah for the Internet! I’m also a big fan of ‘optical research’. The English Agent is set in Paris and London, so I had a few days wandering round Paris, scouting locations, and a very long day-trip to London, again just walking around, seeing where things were. Going to the places you’re writing about makes you realise the story in practical terms (how long would it take a character to walk across Hyde Park, for example, or whether your character would be able to see the horizon from her apartment window) – but also going to an actual place engages all five senses, and knowing how somewhere smells, or the sound your feet make on the floor there, can really help make a location feel real when you’re writing about it.

Do you have a few tips for our newer members?
I bet everyone says this, but DON’T GIVE UP. I went through the RNA’s New Writer’s Scheme three times before I wrote anything good enough to be published, and it took me thirteen years…I hang on to that Samuel Beckett quote: "Ever tried. Ever failed. No matter. Try Again. Fail again. Fail better."

Please tell us more about your latest book.
The English Agent (Simon & Schuster) is out now in hardback. I felt that one of the characters in The Gunner Girl had a story that wasn’t quite finished. I decided to send her off to wartime France with the Secret Operations Executive (SOE) because I was fascinated by the real life stories of the very brave young women who took on such dangerous work behind enemy lines.
I wrote The English Agent in a wild combination of panic and excitement, because I was so worried that I wouldn’t be able to write a book in less than a year, but also thrilled to be able to throw myself into an enthralling new storyline. In retrospect my panic-excitement was probably the perfect state of mind for a novel about undercover agents in Occupied Paris!

What comes next for author, Clare Harvey?
I’m extremely fortunate that Simon & Schuster has signed me up for another two-book deal, so I’m working on my third novel at the moment. I do realise how lucky I am to get paid for doing a job I love, so I don’t have any grand plans, I just want to be able to keep on writing books for as long as I can.

How far will two women go to survive a war?
Having suffered a traumatic experience in the Blitz, Edie feels utterly disillusioned with life in wartime London. The chance to work with the Secret Operations Executive (SOE) helping the resistance in Paris offers a fresh start. Codenamed ‘Yvette’, she’s parachuted into France and met by the two other members of her SOE cell. Who can she trust?
Back in London, Vera desperately needs to be made a UK citizen to erase the secrets of her past. Working at the foreign office in charge of agents presents an opportunity for blackmail. But when she loses contact with one agent in the field, codenamed Yvette, her loyalties are torn.


Thank you Clare. We look forward to your next book.