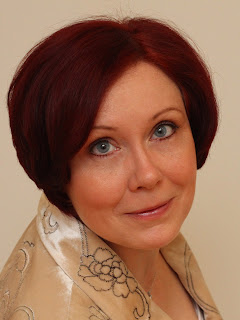 I am delighted to welcome new member Nicky Wells to the blog as she celebrates publication of her first book. Born in Germany, Nicky moved to the United Kingdom in 1993, and currently lives in Lincoln with her husband and their two boys. In a previous professional life, she worked as a researcher and project manager for an international Human Resources research firm based in London and Washington, D.C. Nicky writes fun and glamorous contemporary romance that rocks the world. When she is not writing, she's a wife, mother, and occasional teaching assistant.

I shall now hand over to you, Nicky, for your guest post... Titles and covers, and covers and titles… A tale of mutual interdependence!

Sophie's Turn is my debut novel, a glamorous contemporary fairy tale featuring a rock star and the girl next door. Sophie's Turn is the perfect title, slightly enigmatic for those who haven't read the book, but suggestive, too: of turning this way or another, of having a turn, of turning. I'm deeply in love with it.

But I have to confess, I loved my working title as well. For Sophie's Turn wasn't born thus. My working title was Full Circle. (Actually, the working title before that was Star-Struck but I abandoned that early on as misleading). So, Full Circle. To come full circle. To end up where you began, in a manner of speaking. Probably not quite in the same place. Certainly older, and wiser. And definitely for a good reason. Yes, it appeared to be a powerful title, and for the best part of six years, that was how I referred to my first masterpiece. I had even made myself a nifty little logo, a kind of dynamic circle incorporating an arrow, almost but not quite making a spiral. It graced the spine of the folder that housed my manuscript, as well as the front page, and I had always assumed I was going to make a fancy design with it for the book cover.

Ah yes, that brings me to the crux. The cover. You see, that was when it all fell apart. I was trying to come up with a concept for the cover, and I was working with rings and bracelets and champagne flutes and backstage passes… I was going all out on glitz and glamour and suggestion. However, it wasn't working. No, not at all. How very frustrating. Naturally, I spent the obligatory time agonizing over a million iterations of my cover, right down to a fancy font for my title, Full Circle. It was all- consuming and frustrating, and it was going nowhere.

It was my husband who broke my mental deadlock. “This isn't working,” he observed drily. “What are you actually trying to show here?”

“You've read the book. You know,” I snapped back (for I was in a thoroughly snappy mood by then).

“Spell it out for me again,” he persisted. So I took a deep breath and homed in on the core conundrum. “All right,” I muttered, drawing a stick figure. “Here's Sophie and she's kind of at a crossroads. Should she choose her fiancé, dependable if slightly boring Tim, or Dan, the rock star, who also wants to marry her? Which way should she turn?”

At this stage, I had added thought bubbles and love hearts to the stick figure, and it was a riot of scribbles and colours. My adorable other half, however, read this better than I, focusing on the key word. Turn. He swiftly reconfigured my scribbles into a nifty design involving a signpost at a crossroads. Brilliant. I was electrified and we got carried away building out the concept. Except… bother. The signpost was distinctly… straight, and vertical. Talk about conflicting imagery and metaphors on your cover page.

“It'll have to go,” husband concluded on my behalf, as I was still resisting the obvious conclusion. “Huh?” was my not-so-eloquent response. “The title. You need a different title.”

I bristled… and caved in a microsecond. It was apparent that he was right. So we used the new cover design for a brainstorming session and hit upon Sophie’s Turn. I think we uttered it at the same time, and it stuck. It was just so perfectly… right. I've never looked back.

Oh, but hang on, you say. What signpost? I see no signpost on your cover. It features the Eiffel Tower and a carousel. That's right! Because you're looking at the cover redesign that came a little later in the process, when I wanted to move away from my original hand-drawn cover, beautiful as it was. What's on the cover now gives you a glimpse of the story, has a more glamorous, grown-up feel, it has more panache… yet it still connects with the turning imagery, and the combo is absolutely perfect.

So let me introduce Sophie's Turn to you:


Sophie's dream of marrying lead singer Dan could be within reach…if she could just figure out what to do about her engagement to Tim. 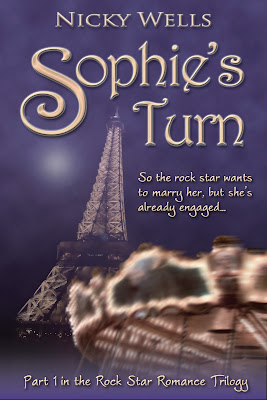 Slapper. Slut. Adulteress. These are hardly words that Sophie Penhalligan would normally use to describe herself. Yet this is exactly how she is behaving, all things considered, even if she isn't quite married to Tim yet. And it's all happening because her past is coming to tempt her! Nine years ago, she met her teenage idol and rock star extraordinaire, Dan, up close and personal. Well, almost. Now Dan has crash-landed back in her life. How could Tim ever stand a chance against the charming, handsome singer? How could she?

Sophie, now twenty-eight and a budding newspaper journalist, is happily embroiled in a relationship with Tim, her boyfriend of two years. Until recently, she was confident that Tim would eventually propose—probably as soon as he could get his act together. But just as Tim's persistent inaction is beginning to cast a cloud over their relationship, Dan's sudden reappearance turns Sophie's world upside down. Thus unfolds a roller-coaster of events including an ill-fated trip to Paris with Tim, a night of unfulfilled romance with Dan, Sophie and Tim's engagement party gate-crashed by Dan, and Sophie's professional secondment to accompany Dan's band on their revival tour—at Dan's special request and very much against her will.

And then, one fine day in Paris, Sophie suddenly finds herself engaged to Dan while her erstwhile fiancé Tim is... well, doing whatever it is Tim does back in London.

This is a great book, Nicky! I wish you every success!

What an amazing opportunity--I am so delighted to be here today and to share the somewhat turbulent evolution of my debut novel's title and cover. Looking back, it's all so obvious but at the time, it was a real journey.

**Waves** Morning, Steph, thank you so much for visiting and for your lovely comment and good wishes. You rock!

I loved both covers for different reasons - have to say that the new cover is pretty stylish.

Great book and oodles of luck my friend.
x

Thanks so much for your good wishes, Sue! I know you liked both covers but the new one... it has something that the old one didn't. Plus purple *is* my favourite colour. XX Thank for commeting!

It is nice to hear the story of the covers and how special! It is an evolution though and I love your revised cover. Something decadent about that colour....

I must admit, I loved the first cover, too! Adore this one, though. And, yes, it does remind me of chocolate! Good Luck, Nicky! :) xx

That was an interesting and entertaining post, Nicky - great cover!

Hello, ladies! Thank you for visiting and commenting, I feel the lurve.
Linn--decadent, indeed. I like that!
Sheryl--you've eaten too much Cadbury's, LOL. Although the cover is suggestive of that, in a way!
Rosemary--So glad you enjoyed the post, thank you for your lovely comment. XX